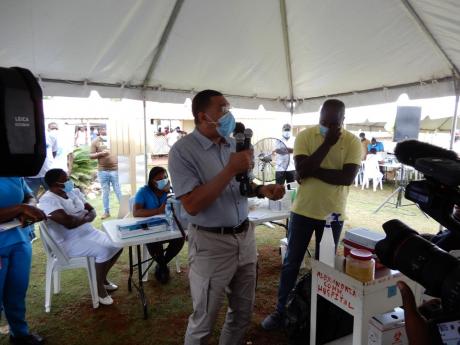 While still maintaining that the Government will not enforce mandatory vaccination, Prime Minister Andrew Holness on Thursday said that unvaccinated Jamaicans will soon have to bear the consequences of their action.

Speaking to residents at the Alexandria Community Hospital during a tour of Alexandria and Calderwood divisions in St Ann, Holness said that the Government is on a drive to administer one million doses of the vaccine by next month.

“So we are eventually moving into that space where the number of persons vaccinated will outnumber those who are not vaccinated. By November, we will reach one million doses and then after that, the numbers are going to increase gradually. When we pass the 50 per cent mark then there will be no question about the need for having a vaccine option,” Holness said.

“Some people want to call it mandatory, I am not mandating or forcing anybody; if you don't want tek it it's your business but don't expect the rest of the society to bear the consequences of your hesitancy,” he continued.

Holness said that COVID-19 patients were taking up bed spaces in hospitals that are meant for persons who need to do elective surgeries, stressing that this situation has to change.

“When we return to normal that won't happen again, so if you get COVID you will be treated like any other patient and not specially. So, we're moving into that space but I have to come to you and explain it to you.”

Holness said the Government will not force anyone to take the vaccine as persons are free to choose.

“Everybody in Jamaica is free; we take freedom as a priority in this country but freedom comes with responsibility. Yuh free to do nonsense but your nonsense should not affect the people who have used their freedom wisely. So if you believe that the vaccine is some kind of new world order, apocalyptic, destructive force, that's your business, you believe that. But don't affect the farmworker who believes that the vaccine is his ticket to economic progress and prosperity.”

Holness argued that the country's health status is going to determine its economic status, adding that Jamaica needs to return to normalcy as Government does not have the money to make continuous allocations for “the poor, the indigent and the vulnerable.

“That is not going to be possible all the time, and where does it come from?

The only way that we're going to come out of this economic situation that we find ourselves in is if our economy returns to normal,” he said.