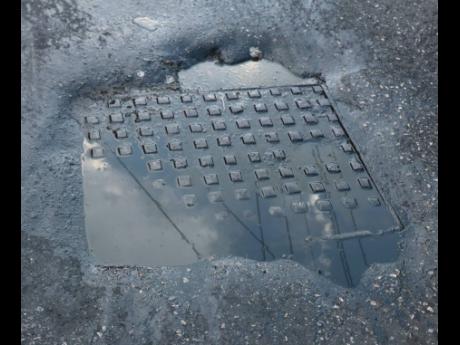 Ashley Anguin
An overflow of sewage on Union Street in Montego Bay.

Despite efforts by the St James Municipal Corporation (StJMC) to get vendors and restaurant operators to properly dispose of their food waste, a recent overflow of sewage in downtown Montego Bay is being blamed on discarded waste, including used cooking oil.

According to Teisha-Ann Pinnock, acting corporate communications manager at the National Water Commission’s (NWC) western division, restaurant operators are to be blamed for the sewage overflow in the vicinity of the Baywest Shopping Centre in downtown Montego Bay.

Since the problem surfaced several days ago, at least one pedestrian has suffered injury as a result of trying to avoid the sewage, which has been coming up from the street-side manhole cover.

“The supervisor has checked, and there is an overflow there in that area. The team is going there to clear it. What the supervisor said is that when you start to have frequent overflows in that area, there are a lot of fats and oils; things that should not be going in the sewer are causing the overflow, like oils from the restaurants,” explain Pinnock.

“There was a blockage there on Friday, and the team cleared it, then it started to overflow again. Apparently, it started overflowing on Monday or Tuesday and nobody reported it,” added Pinnock.

While food vendors operating on the streets of the western city are known to engage in the improper disposal of their waste, Pinnock did not single them out as a part of the problem.

“I do not know about the soup vendors [being responsible]. I know that things that should not be going in the drains, like oils and other things, are causing the blockage. I cannot pinpoint any specific person,” Pinnock said.

Lennox Wallace, parish manager for the St James Health Department, said investigations would be carried out at the various food-handling businesses in the area, as such improper disposals would pose an environmental risk.

“I am just hearing of that for the first time. What I will do is to have my officers make the assessment and have them inspect the facilities in that general area, because such a scenario would impact the sea that is close by the Pier One restaurant and going right back around to Fisherman’s Beach, and that would destroy marine life,” said Wallace.

The possibility of restaurants and other food handlers being responsible for the waste getting into Montego Bay’s drains runs contrary to what is outlined in the ongoing StJMC’s education drive, which condemns such practices. The education drive, which began in August 2017, is focusing on hygiene training for food vendors.

In November 2019, the StJMC got reports of food vendors and restaurant operators falling back into the bad practice of the improper disposal of waste, which was blamed for a massive rat infestation problem. At that time, the education campaign was intensified to urge compliance.