The Puseys – a 50-year relationship powered by love and respect 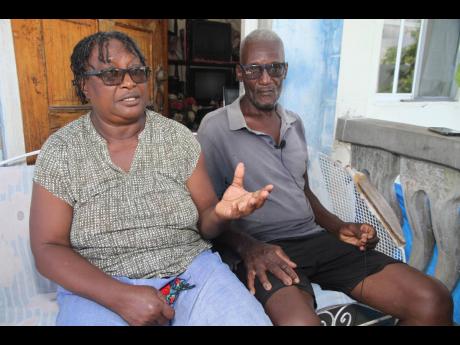 Looking at Ivanhoe and Saldore Pusey as they sit beside each other on their verandah in New Longville, Clarendon, the abiding love, camaraderie and respect between them could not be missed.

They played around, joked and reminisced on their relationship which started 50 years ago.

Growing up in the same community, the Pusey’s attended school together with Ivanhoe, who is older by five years, finishing ahead of Saldore. However, with his eyes always on her, Saldore recalled him ‘lurking’ in the lane, arms folded and making sure she saw him wherever she went.

The then 15-year-old never stood a chance against her suitor’s persistent lyrics, until he wore down her defences, he bragged to Family and Religion.

His wife, however, told a different story as she teased that he wasn’t handsome and, despite his bragging, his lyrics was not what drew her to him.

In between their cladestine courtship, Saldore said although Ivanhoe didn’t have much money, she thought he was a nice person and eventually fell in love with him.

At about age 16, she discovered she was pregnant after her parents took her to the doctor and got the information first hand.

“My father told my mother he heard that some ‘meet up a gwaan’ pon di road,” she recalled with a laugh.

Saldore said her father sent and call her young love to have a talk with him.

Picking up the story, Ivanhoe said he remembered everything about that Independence Day so long ago. He was dressed up and ready to go out when he got the message, and not exactly knowing what to expect, he said he ‘draw two spliff and red up himself” as he used to smoke back then, and set out to meet his father-in-law.

“Him talk to me and him sey ‘a one ting meck mi nah go gwaan bad, thru mi know sey yuh have manners and respect and you is not a idler, and mi nuh see you inna no idle company and nuh body nuh have nutten bad fi sey bout you ... teck care a har yah sah’!” he quipped laughing. “If a now, police woulda must lock mi up.”

Fast forward to 2021, a few months shy of 50 years of the Pusey’s revelling in their union to the admiration of those they come across in the community.

They both share that others see them together and say they admire the way they live.

Saldore shared that her husband doesn’t like to go anywhere without her. She laughed as he quipped, “But you know sey you a mi spokesperson”.

Sharing on the secret of them living together without ever having a major quarrel, Ivanhoe said it is love pure and simple. Plus, he is not afraid to tackle jobs around the house. This time it is his wife’s turn to throw in a comment as she quipped, “You wouldn’t want me one fi do it.”

During their union which produced five children – four boys and one girl (one deceased), she said Ivanhoe has been very supportive, coming home straight from work and just being there whenever she needed him.

As they celebrate their union, the Puseys say love and respect will keep them going – who knows? Maybe for another 50 years.