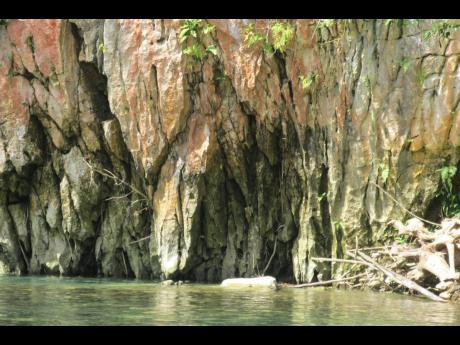 Photo by Paul H. Williams
A section of a cliff with a sheer drop into the Spanish River, in which the final battle between the British and the Windward Maroons took place in the 1730s. 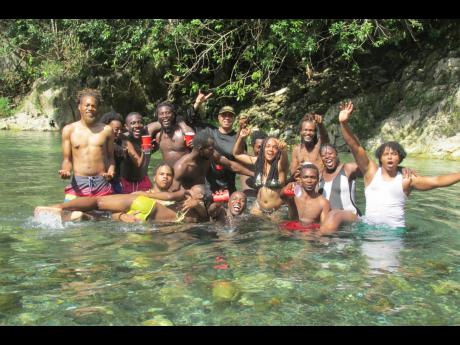 Photo by Paul H. Williams
Captain Quao and his people moved from the hills to settle in Crawford Town, Portland, and then to Charles Town in the said parish. Here, Charles Town Maroons are having a party with some American students in the Spanish River, site of the final battle between the Windward Maroons and the British in the 1730s.
1
2

From the very moment some captured Africans arrived in Jamaica to work on plantations, they had planned their escape. And so, as soon as they got a chance, they fled to the hills and mountains all over the country.

The ‘wild negroes’, as they were originally called, set up mountain villages and eked out a living for themselves.

They were endlessly pursued by the colonists. As soon as they chanced upon a settlement abandoned by the runaways, they would plunder and burn it to the ground. One such settlement was Old Nanny Town, located in the Blue Mountains, more so the Portland section.

Led by Captain Brook, the British troops reached there on December 17, 1734. But, by the time they arrived, the fleet-footed people had fled. The town was held by Captain Cook until July 2, 1735. Whomever they were waiting for did not turn up. They had long re-established their settlement. Among them was a young runaway called Quao, who quickly rose to prominence in the ranks of leadership as a military captain.

To find the runaways, the colonists set up a force commanded by Lt George Concannon. His second in command was Lt Philip Thicknesse, a youth of about 20 years old.

Trudging in the wilderness

After three days of trudging in the wilderness they arrived at a spot where they saw recent footprints of people and dogs. It was now nightfall, so they decided to set up camp and launch an attack the following day. All they found was a fire burning in each of the 74 huts. Quao’s scouts had long spotted them in their red coats. In frustration, they set all the huts on fire, before continuing their pursuit.

They stepped up their pace, for they were convinced the Maroons were not far away. In that unfamiliar place of geographical features that the unfit and uninitiated could not conquer, the troops were beginning to get weary, weak and tired. Many fell behind, a few came to a full stop. They decided to turn back, but realised that they were lost. So, they headed for the Spanish River.

And, as if their low morale were not enough, they were drenched in a heavy rainstorm on their way to the river. There was slippery mud everywhere. Struggling with the weight of the wet clothes, their spirit rose when the river came into view. Yet, they were never alone. All this time, their every movement was monitored by Quao’s scouts. The hunters had unknowingly become the hunted.

As soon as the scouts were certain which way the troops were going, they returned to the main body of warriors. Quao was informed of the number and composition of the enemy and was told they were heading for the river. Travelling swiftly, the Maroons got ahead of the disillusioned soldiers and prepared an ambush.

From the bushes, they watched the soldiers approach the river. Quao allowed them to pass through the trap, and then gave the signal. The Maroons emerged from the bushes and fell upon the hapless soldiers with much force and terror. The horrified militia was the first to panic and take flight. The enslaved baggage carriers were next. The regular troops plunged into the river with Concannon and Thicknesse, and quickly waded for cover behind large sections of hillsides which had broken away and stood in the middle of the river.

From behind the mass of dirt and rocks, the troops began firing wildly at every puff of smoke which indicated the presence of Maroon sharpshooters.

Suddenly, the rain clouds started to drift away and the sun appeared right over their heads. It bore down on them in the waist-deep water in which they stood for about four and half hours. From there, they fired aimlessly until their ammunition was almost finished.

They did not realise the Maroons had crossed the river until a shot rang out from the other side. They were taken off guard once again. Running in all directions, they abandoned their positions, and splashed desperately across the river as shots from the Maroons’ guns rang out.

Some raced into the woods, leaving the dead and wounded behind. Some of the wounded, in desperation, followed their fleeing commander and his deputy. In their weakened and dying state, they climbed very steep hills, abandoning their luggage of food and clothes. As they clambered up the hillsides, they heard the Maroons rejoicing in the river below. They were defeated, humiliated and done.

Knowing full well that the Maroons were too good, the colonists eventually found them to beg for peace. There was much tension and distrust between the two sides. Even within the ranks of the Maroons, there were disagreements over the presence of the colonists in their village, but Quao was prepared for any betrayal of trust.

Among the pacifiers was Thicknesse, who lingered for a while in the village.

The story is that, when he asked Quao if Concannon’s troops had done any harm to his men in the Spanish River fight, Quao, who the literature said was a good speaker of English, asked, “You see this hole in my cheek? One of your shot bounce against my gun, fly up, and make this.”

He said he was the only one of the Windward Maroons who had “lost a drop of blood”.

After trust was gained from either side, a treaty of peace and friendship was signed between Quao and the Windward Maroons, and the British on June 23, 1739, effectively bringing an end to the Windward chapter of the First Maroon War.