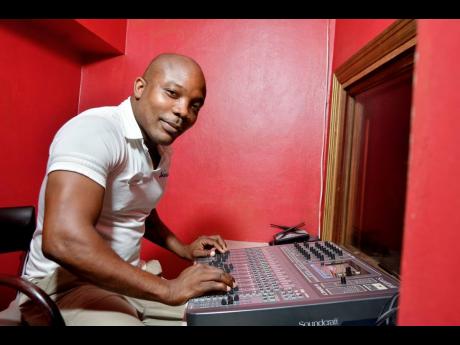 As was the master in the popular Parable of the Talents (Matthew 25) pleased with those who had utilised and otherwise built on the gifts with which they were entrusted, so too would the men in the Thomas family line find pleasure in Rohan’s honing of the ancestral trait.

Proving true the adage that talents are hereditary, the expert audiovisual (AV) technician has taken on the trade of his elders, sharpening the skill with professional training, experience and exposure.

Thomas is the grandson of Franklyn Bell Sr, who was also an audio engineer for equally acclaimed music icons like Bob Marley and Jimmy Cliff. His uncle, Franklyn Bell Jr, is also in the same line of work, and like his dad, he too is working alongside reggae artistes. While audiovisual engineering is his profession, Thomas is adamant that it is also his talent; something that obviously runs in his family.

“All the men in my family are audiovisual engineers. Growing up, that was how my family earned and ate,” he said.

As the AV technician at Sandals South Coast in Westmoreland, which caters to a wide variety of events ranging from meetings, conferences, socials and weddings, Thomas is responsible for light, video and sound.

And though the skill may not be as celebrated a talent as singing or dancing, Thomas, who spoke highly of his responsibility, refuses to bury his blessing in the ground as the foolish servant.

He grew up in Cooreville Gardens, St Andrew, with his grandparents, aunt and uncle. He was the baby in the family who everyone wanted to take under their wings and was just about three years old when his grandmother noticed that the only toys he found intriguing were mixer boards, two-way radios and microphones. With this in mind, she thought it prudent for them to harness his passion.

“My grandmother ensured that I went to the studios with my grandfather whenever I could from as far back as I can remember. Even though I was just a kid, Papa carried me along and he would teach me a few things,” Thomas explained.

As he grew, so too did his love for the business. The zealous young man set out on a journey, which saw him jetting off to the United States of America (USA) to live with his mother, where he enrolled in the University of Central Oklahoma to further his studies.

Thomas lived and worked in the USA for about nine years, perfecting his skills and family talent. However, he always knew that Jamaica was where he wanted to settle. His aunt’s leukaemia diagnosis was the catalyst for his return.

“When I learned that my aunt, the woman who was a second mother to me, had cancer, I immediately packed and headed home. I wanted to be there for her to care for her as she did for me,” a seemingly emotional Thomas recalled.

The family man shared that unfortunately, his aunt lost her battle to cancer but he decided to remain in Jamaica and build on the foundation that the men in his lineage had set.

“After my aunt passed, I wanted to start anew but to also continue in the footsteps of my relatives. I heard about an opportunity in the hospitality industry where Sandals was looking for an AV technician and I gave it a shot. Now, five years later, I can safely say that I have no regrets. I am pursuing my passion and growing daily,” shared Thomas.

Now among the best at what he does, he shared, “I couldn’t ask for more. If my aunt were still alive, she would be very pleased to see that I followed through with my dreams and that what my grandfather imparted to me has helped to mould the man I am today. I strive to make her proud and to make my family know their efforts were not in vain.”