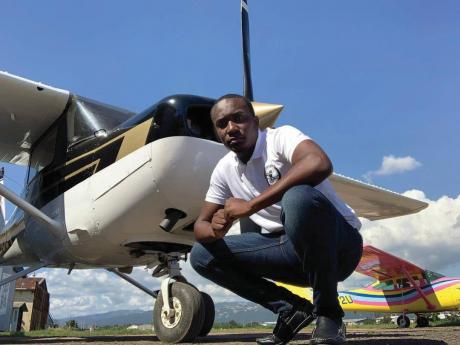 Contributed
Aspiring pilot Rohan Ellis stoops in front of the Cessna aircraft on which he is learning to fly at the Aeronautical School of the West Indies, which is located at the Tinson Pen Aerodrome, Kingston. 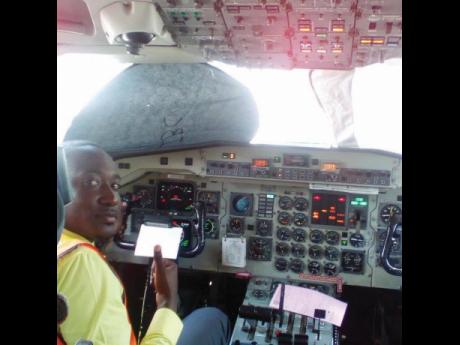 Contributed
Rohan Ellis sits in the cockpit of the Cessna training aircraft on which he is completing his flight training at the Aeronautical School of the West Indies, located at the Tinson Pen Aerodrome, Kingston.
1
2

ROHAN ELLIS has always been fascinated by airplanes.

As a child, he would spend many weekends at the Norman Manley International Airport (NMIA), where his mother worked, watching planes come and go, and dream of one day sitting in the cockpit and piloting those amazing machines to destinations all over the world.

“I used to see the Air Jamaica and British Airways airplanes and decided then that I would experience flying one of those planes one day,” he says. Ellis began flight training in 2017, but he says that “things did not work out” with the flight school. “I was kind of left hopeless at that point wondering if a second chance would come my way,” he said. He soon heard about the Aeronautical Club of the West Indies (ACWI) and began to volunteer his time there, eventually landing a job in the marketing department of the Aeronautical School of the West Indie (ASWI), located at the Tinson Pen Aerodrome, Kingston, with which the club is connected.

“I’ve been there working with them, getting things together, ensuring that persons know about us and know that the [local aviation] industry is still alive and well,” he said.

Ellis described his experience with ASWI as excellent. He said he has learned a great deal and is pleased to have been able to witness first-hand the process of certification of the institution as an Approved Training Organisation (ATO) by the Jamaica Civil Aviation Authority (JCAA).

The certificate was officially handed over in August 2021.

The aspiring pilot has taken the opportunity of his employment to also become an ASWI student and has been in flight training since January 2021. For his part, ASWI maintenance director Christopher Gooding explained that the school is currently training 10 students per intake based on classroom capacity and having only one aircraft. “We have to look at the coronavirus (COVID-19) requirements and how we can go ahead and train our students. It is a very tedious training process. We can have more students but we need to plan properly so that the training does not interrupt any other training. You don’t want people to feel we are not delivering a service because we are a service industry,” he pointed out. Gooding said that the school already has an intake of ground-school student, and with the recently acquired certification, has moved to the next stage, which is flight training.

ASWI Accountable Manager Gari Tomlinson said the flight training requires a minimum of 40 hours of ground school followed by a practical examination, which is called the check ride.

The theoretical part of the course [ground school], he noted, ranges from three to six months, “and we package it as both a full-time and a part-time course, so the weekend class is a six-month course and the full-time weekday class is a three-month course”.

At the end of the course, students take an examination at the JCAA, after which they can get a student pilot licence, which allows them to begin flight training.

“After you’ve completed your training and we are confident that you can sit the exam, you do the check ride with the JCAA, and upon passing that, you get the pilot’s licence,” Tomlinson says.

The minimum requirements for entry to become a pilot is five Caribbean Secondary Education Certificate subjects or the equivalent, including mathematics and English.

One of the successes of ASWI, Gooding says, is being able to bring down the cost of training by up to 20 percentage points less than the previous flight school cost in Jamaica, and the accountable manager says that the aim is to lower it even further.

“We continue to work with the Government of Jamaica to try to bring that price down. We also give some scholarships, and persons can visit our website to apply,” he said.

Providing flight training in Jamaica, at an affordable cost, is in keeping with the mission of Transport and Mining Minister Robert Montague to encourage more Jamaicans to opt out of going overseas for such instruction.

In August 2021, when ASWI was awarded Approved Training Organisation status by the JCAA, Montague described the occasion as historic, pointing out that the last time an ATO certificate was handed over to an approved flight training school was in 2011.

He noted that flight training had not taken place in Jamaica since 2019.

“Approximately 3,500 Jamaicans are in South Florida learning to fly. Today, we intend to cut that off … so we are going to be reminding Jamaicans that flight training is now up and flying in Jamaica,” the minister said.

Ellis is among those grabbing the opportunity with both hands as he seeks to fulfil his childhood dream of taking the best seat in the house: the cockpit.