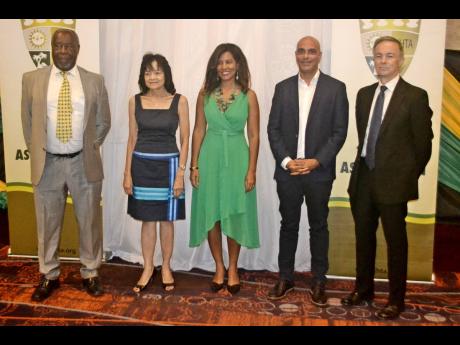 Five stalwarts in the tourism industry were honoured by the Government of Jamaica on National Heroes Day for their contribution to the development of the sector.

They are Donald Grizzle of Charela Inn, Negril; Camille Needham, executive director of the Jamaica Hotel and Tourist Association (JHTA); Nicola Madden-Greig of the Courtleigh Hospitality Group; Paul Salmon of Rock House, Negril, who all received the Order of Distinction, Officer class (OD); and John Byles of Chukka Adrenaline, who received the Order of Distinction, Commander class (CD).

The five were part of dozens of persons who received national honours from the Government of Jamaica on National Heroes Day 2021.

Senior strategist in the Ministry of Tourism, Delano Seiveright, who was at the function, hailed the work of the tourism industry stalwarts.

“We’re absolutely thankful for the work that you guys have done for the tourism industry in Jamaica,” he told them.

He said Tourism Minister Edmund Bartlett was “absolutely appreciative of the hard-working leaders in the tourism space and the contributions you have made to the development of your country”.

Acknowledging the challenges faced by the sector, Seiveright said the hard work of persons in the tourism industry was helping Jamaica’s economy to get back on its feet.

Madden-Greig, speaking on behalf of the honourees, told The Gleaner that she was appreciative of the award.

“It’s very humbling, and we’re very appreciative of this honour,” Madden-Greig said. She added: “Tourism is the lifeblood of our nation and as a group, we’ve had a lot of challenges over the last 18 months, particularly with the pandemic. What it has shown me is just how well as an industry we work together, through whatever challenges, whatever difficulties. The passion, the commitment, the love is there; and I’m just honoured and really, really pleased to have been a part of the team that has been working towards recovery, and of course, just very honoured today to be one of the recipients.”

Meanwhile, JHTA president and managing director of Moon Palace Jamaica Clifton Reader, who hosted the awardees and other members of the tourism sector, joined in commending the awardees for their contribution to the development of the industry, while underscoring the importance of tourism to Jamaica.

According to Reader: “The development of tourism in Jamaica is always a very important thing, and this morning we had 25 people, all protocols observed, physically meeting at Moon Palace, watching the Prime Minister and the Government basically giving the awards. We just believe that we have a strong tourism contingent, a strong effort in Jamaica to make Jamaica better, to take Jamaica out of the pandemic. We just want to thank them very much as we move on.”