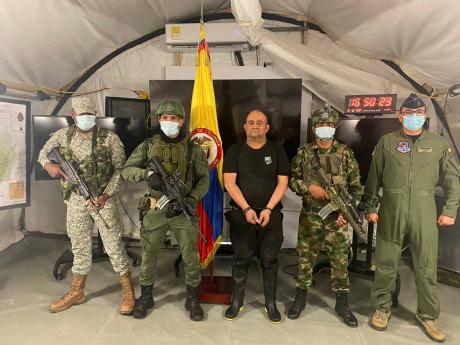 In this photo released by the Colombian presidential press office, one of the country’s most wanted drug traffickers, Dairo Antonio Usuga, alias ‘Otoniel’, leader of the violent Clan del Golfo cartel, is presented to the media at a military base in Necocli, Colombia, on Saturday.

The Trinidad and Tobago police are investigating the death of a 28-year-old Jamaican man, who was shot and killed on Thursday night in Diego Martin.

According to reports, Akeem Thompson had gone to visit a friend at Cuthbert Circular in Four Roads, when on leaving the house, he was shot several times.

A medical officer declared him dead at the scene.

The police have not yet established a motive for the murder.

PAHO calls for increased vigilance amid 30-year celebration without polio

On the eve of today’s World Polio Day, the Pan American Health Organization (PAHO) has marked the 30th anniversary of the last case of poliomyelitis in the Americas, including the Caribbean, calling for increased vigilance.

On Friday, PAHO said that in August 1991, a Peruvian boy from the country’s Junín mountains became the last person to be detected with the wild poliovirus.

Three years later, in 1994, PAHO said the Americas became the first region in the world to be certified as polio free by the World Health Organization (WHO).

“This extraordinary accomplishment was made possible by mass vaccination efforts and robust epidemiologic surveillance that was underpinned by a strong network of laboratories,” said PAHO Dominica-born Director Dr Carissa F. Etienne.

“We’re reminded of what this region can achieve when it works together to keep health threats in check, when we protect the most vulnerable, and ensure all people have access to life-saving vaccines,” said Etienne, calling on countries to increase polio vaccination rates, which have declined in recent years due to various causes, including increased vaccine hesitancy even before the COVID-19 pandemic.

Colombian security forces have captured the country’s most wanted drug trafficker, a rural warlord who stayed on the run for more than a decade by corrupting state officials and aligning himself with combatants on the left and right.

President Iván Duque likened the arrest Saturday of Dairo Antonio Úsuga to the capture three decades ago of Pablo Escobar.

Úsuga, better known by his alias Otoniel, is the alleged head of the much-feared Gulf Clan, whose army of assassins has terrorized much of northern Colombia to gain control of major cocaine smuggling routes through thick jungles north to Central America and on to the United States.

He has long been a fixture on the US Drug Enforcement Administration’s most-wanted fugitives list, for whose capture it had been offering a US$5 million reward.

Turkish President Recep Tayyip Erdogan said Saturday that he had ordered 10 foreign ambassadors who called for the release of a jailed philanthropist to be declared persona non grata.

The envoys, including the United States. French and German representatives in Ankara, issued a statement last week calling for a resolution to the case of Osman Kavala, a businessman and philanthropist held in prison since 2017 despite not having been convicted of a crime.

Describing the statement as an “impudence”, Erdogan said he had ordered the ambassadors be declared undesirable.

“I gave the instruction to our foreign minister and said ‘You will immediately handle the persona non grata declaration of these 10 ambassadors,’” Erdogan said during a rally in the western city of Eskisehir.

He added: “They will recognise, understand and know Turkey. The day they don’t know or understand Turkey, they will leave.”

The diplomats, who also include the ambassadors of the Netherlands, Canada, Denmark, Sweden, Finland, Norway and New Zealand, were summoned to the foreign ministry last Tuesday.