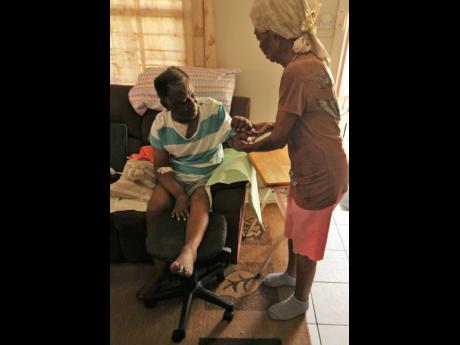 Christopher Serju
Cynthia Barrett demonstrates how she helps her son Lloyd with physiotherapy exercises at home. 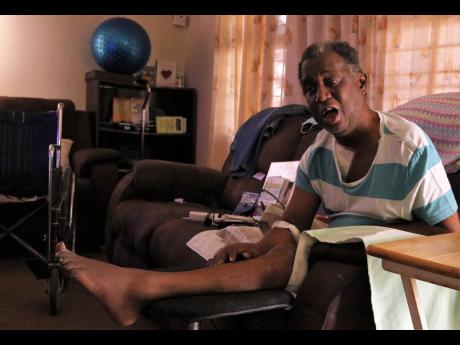 Christopher Serju
Lloyd Barrett speaks about the stroke which has effectively rendered him a prisoner in his home and now threatens his life, as his kidneys no longer work, forcing him to undergo dialysis twice a week.
1
2

These days Lloyd Barnett spends most of his time reflecting on the good old days when he held a decent nine-to-five job, was upwardly mobile, and had not a care in the world.

Each morning his mother, Cynthia Barrett, helps her son into a wheelchair before wheeling him into the living room of his home in Edgewater, Portmore, where he spends the entire day, passing the time between watching television, reading, chatting on the phone, or checking out things on his laptop. At night, he is wheeled back to his bedroom.

It is a routine to which Lloyd has become accustomed over the past nine years, since being cut down by a stroke caused by a ruptured aneurysm on the right side of his brain, which controls the motor functions on the left side of the body, rendering that side of his body paralysed.

Lloyd recalls that this life-changing event happened on February 10, 2012, while he was on the job. Thereafter, was in a coma for more than 50 days.

Once again, his life is in the hands of strangers.

“I am actually begging for help to fund my kidney operation. The cost of the surgery is US$40,000 for it to be done at the University Hospital of The West Indies. I also need a donor, but I know the donor will come, even though I haven’t found the person yet,” the 60-year-old with B+ blood type candidly admitted to The Gleaner recently.

Before discharging him from hospital, the doctor advised Barrett that his kidney functions had started to deteriorate, and so he asked what he could do about it. ‘Drink a lot of water’ was the advice from the doctor.

As he settled into his new way of life, which included physiotherapy sessions, Barrett remembered the doctor’s advice and via the Internet, learnt that coconut water was good for the kidneys. What he didn’t learn until it was much too late, was that coconut water and ripe bananas, of which he was consuming about 14 a week, are both high in the mineral potassium.

“So, religiously, I was feeding on at least two ripe bananas per day, plus a glass of coconut water. I thought it was helping me, because I was doing physical therapy at the same time, not knowing that I was destroying my kidneys or making them worse. Things got progressively worse until my body functions, like urination, started to dry up.

“I don’t urinate any more, because what happened is that if the kidneys are not working properly, then they can’t eliminate the liquid waste from your body. So that ends up mixing with your blood and poisoning your system.”

The reason for sharing his story, Lloyd admitted, is to find a kidney donor and the money to do the operation. He is concerned that the responsibility of attending to his personal care each day for more than a decade, which includes preparing his meals, doing laundry and tending to the house, is taking a severe physical and psychological toll on his 87-year-old mother.

Though she never complains, the senior citizen disclosed that she looks forward to the days when Lloyd goes to do dialysis, ironically, for the rest it allows her during the four hours he is hooked up to the machines which clean the impurities from his body.

Getting to the medical centre in time to register and having to wait for the availability of a machine, means that for the two days of his treatment, they usually arrive at 9 a.m. and don’t leave until 5 p.m. sometimes. This usually leaves Lloyd very exhausted and provides a respite for Cynthia.

“From he took sick I have been with him, I don’t leave him. I don’t sleep in my house one night from he took sick,” she disclosed, adding that she doesn’t usually get to sleep before midnight, after ensuring that her son is in bed and the house is secure.

Confined to the living room most of the time, Lloyd admits that even though it is physically draining, he does finds himself looking forward to the break from the monotony that the dialysis days provide. However, at $27,000 each week, the cost is proving to be prohibitive, with another $2,000 for taxi fare. This was the reason he had to give up the physiotherapy sessions, which, at $4,000 a session, was costing him $8,000 each week.

“So I had to give up one to keep doing the other,” he shared.

Along the long, slow, physically demanding and very expensive journey from death’s door, Lloyd has had a long time to reflect on life, recognising for all this, he still has a lot for which he can grateful.

“My brain function is improving, because coming out of the coma I couldn’t talk, and afterwards my speech was slurred. My right side is fully functional and I never lost any sensation in it,” he disclosed.

The left side, where he has lost all sensation, has begun to atrophy due to the years of lack of exercise. But he was able, with much effort, to flex his toes a little for The Gleaner, which he was not able to do at one time.

“Yes,” was the emphatic answer from Cynthia, when her son was asked if he anticipates regaining some measure of mobility?

“Yes, because he has hope, and I have hope that he will get better. He keeps praying to the Lord; and him pray hard, you know.”

For anyone who wants to help Lloyd Barrett, either by donating a kidney or contributing to the cost of the surgery, his NCB saving account number is 104030149. Support his GoFundme Account or contact him by calling 876-344-6855.