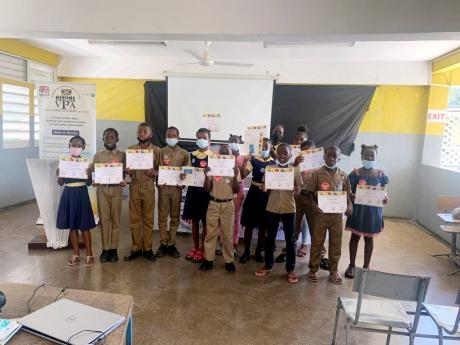 Contributed
Students of Jones Town Primary School who participated in the peace building camp show off their certificates of participation at a close out ceremony, recently.

TWENTY CHILDREN from Jones Town Primary School participated in a peace-building camp, dubbed ‘Pathways to Peace: Children Leading the Way’, conducted by the Violence Prevention Alliance (VPA) and funded by the United States Agency for International Development (USAID), through its Positive Pathways Activity.

“It is always a challenge to implement a short intervention like this and hope to make a difference,” said VPA’s Executive Director, Dr Deanna Ashley.“We wanted to address the needs of the youngest children identified in USAID’s Positive Pathways Activity – the 10 to 12-year-olds – and hopefully plant a seed of hope and peace within them.”

The short camp conducted six sessions led by facilitators who have experience working with this age group, over a period of four weeks in August and September. They used the five Es (engage, explore, explain, elaborate and evaluate) and their activities included stories, discussions, games, and quizzes on topics such as bullying, being responsible, making peace, problem-solving, values and attitudes. The creative and expressive arts were central to the sessions, and so the children used art and craft to plot their personal career goals. They also explored feelings through role plays, which further helped them develop messages about promoting peace.

The sessions culminated in the students participating in a short video, where they shared their fears as well as their messages of peace to their community and to Jamaica. They were coached by renowned dramatist and educator Owen ‘Blakka’ Ellis. Many of the children reported not feeling safe within their community, demonstrated through the use of the traditional Jamaican game, ‘Bull in the Pen’. Rooted in the subconscious need to break free from bondage, it related to the oppressive violence that characterises the children’s daily existence.

VPA, the Jones Town Primary School and sponsors USAID Positive Pathways hope that this nurturing will be possible and that over the next five years of their lives, these youngsters will be on the ‘pathway to peace’ that they started in 2021.

This initiative was one of the first activities conducted under the USAID Positive Pathways’ community peace-building grant.