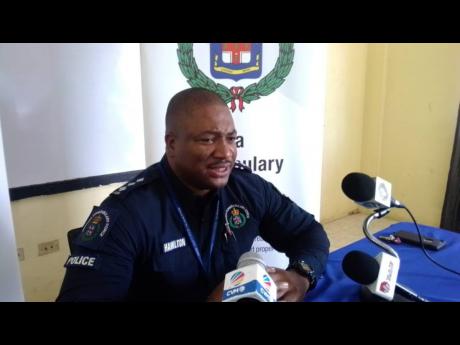 THE WESTMORELAND police have described the recent spate of killings in Savanna-la-Mar as ‘senseless and barbaric’, and say they will be using all the tools at their disposal to put an end to the rampant lawlessness, which is being blamed on gangsters aligned to Dexter Street and Dalling Street.

Westmoreland, which recorded five murders in five days over the last week, was among the seven police divisions across the island that were placed under states of emergency (SOE) on Sunday by Prime Minister Andrew Holness in response to the rampant lawlessness plaguing the nation.

As it relates specifically to Westmoreland, Deputy Superintendent of Police Adrian Hamilton, the officer in charge of operations in the western parish, says the police have identified some of the players in the bloody criminal mayhem and is calling on them to surrender or leave themselves exposed to aggressive policing.

“We have identified some of the perpetrators and we would want them to turn themselves in to the police,” said Hamilton. “If they don’t, we are going to be going after them aggressively in trying to apprehend them … we will be using all the tools at our disposal to ensure that these perpetrators are brought to justice and they are taken off the street.”

While the list of gangsters is said to be quite extensive, Hamilton said the police have identified four main players, who are much feared because of the level of viciousness they are known for. The men have been identified as Jason ‘Timmy’ Harris, Alwayne Samuels, Jahhiel ‘Bimmer’ Doman, who is also wanted in St James; and Rycal ‘Tuggy Tuggy’ Barrett.

Despite the best efforts of the police to quell the violence, the closeness of the two warring communities and the difficulty in navigating the terrain in which the gangsters operate is making the task quite difficult.

“What we have is a mixture of persons living in wide, sometimes underdeveloped areas with footpaths, zinc fences, poor lighting, poor amenities ... these are challenges the police have to contend with,” said Hamilton. “We just have to push on as best we can to ensure that the persons committing these atrocities are brought to justice.”

Hamilton said the police are deeply saddened by the fact that many persons are losing their lives senselessly because of the callous nature in which the gangs operate.

Sometimes the only association that somebody has that cause a loss of life is that they are living on a particular street or they may be associated through blood or otherwise superficially in some cases, to some other individuals ... this is pointless and also criminal,” said Hamilton.

The police have been making inroad with the arrest of several violence producers but it is clear that a lot more criminals will have to be taken out of circulation to bring the situation under control.

“We now have 144 persons in custody in the Westmoreland police division and this is testament to the work that the police have been putting in on the ground,” said Hamilton. “We want the residents to come on board and support the efforts of the police.

“I know some of them are bleeding and they are very hurt and they, in many cases, may want to exact revenge, but we are saying that if that continues, where is it going to stop ... the communities must be resolute in helping us to stamp out the violence,” added Hamilton.