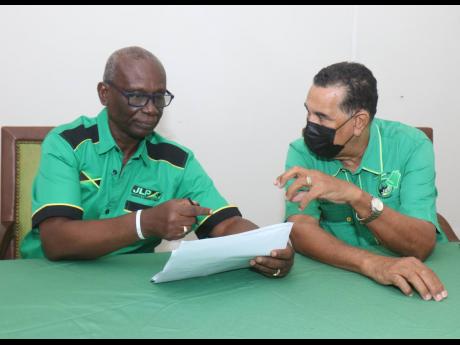 The Jamaica Labour Party (JLP) intends to stage Sunday’s annual conference at 10 locations across the island to ensure compliance with COVID-19 restrictions.

During a JLP press conference in Trelawny yesterday, party officials also disclosed that with a 50-person limit in mind for each location – including the traditional location, the National Arena in Kingston – the expected 500 delegates will be linked via live-streaming from the locations based in the party’s four regions.

He said that Holness will also speak extensively to the country’s crime situation, which forced the Government to impose states of emergency in seven police divisions across the island last week.

“Crime is all of our concerns and I believe, collectively, as a people, we can overcome that hurdle if we truly commit ourselves to the fight against crime,” said McKenzie, who is also the local government and rural development minister.

McKenzie noted the JLP’s successful sweeping of the three constituencies in Westmoreland in the general election just over a year ago, although it subsequently lost Westmoreland Central when Member of Parliament (MP) George Wright quit the party to become an independent member of the House amid a scandal earlier this year.

The party, McKenzie said, will be giving the remaining two MPs as much support as possible.

“I must point out that Westmoreland will be one of our main areas within western Jamaica in this year’s conference,” said McKenzie. “It’s a parish where the MPs are relatively new, so the focus will be in Westmoreland to highlight the new members of parliament and to give the kind of support and respect to the people that they gave to the Jamaica Labour Party in the last general election.”

In Area One, delegates will be hosted at the National Arena as well as the Denham Town Community Centre in Kingston; the Stony Hill HEART Academy and Papine High School in St Andrew.

On Sunday, delegates in Area Council Two will gather at the Eltham High School in St Catherine and Port Antonio High in Portland.

Those in Area Council Three will head to remote locations at the Ocho Rios High School in St Ann, and Denbigh Showground in Clarendon, while Area Council Four delegates will join the conference from the Luana Bennett Banquet Hall in St Elizabeth, Boardwalk Business Centre in Westmoreland, and the Montego Bay Community College in St James.