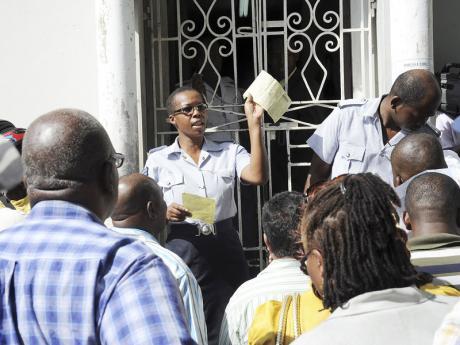 The TAJ is advising people with tickets to visit the courts or to contact the National Security Ministry to be further guided.

Tax Administration Jamaica (TAJ) says it is currently not able to collect payments for traffic ticket fines at its tax offices or via its online portal.

This is because it has not received the finalised list of traffic offence codes to update its systems for the collection of fines defined by the recent changes to the Road Traffic Act.

Three weeks ago, the Parliament hastily pushed through the amendments to the Act in the House of Representatives and the Senate following a Supreme Court injunction barring the police from issuing traffic tickets in excess of rates charged up to 2006.

The TAJ says the relevant agencies are now working to resolve the issue.

In the meantime, traffic ticket fines as defined by the new legislation presented at a tax office or attempted to be paid online will not be accepted or processed.

"Persons are urged not to visit the tax offices or attempt to make payments online," said a TAJ spokesperson in a media statement.

The TAJ is advising people with tickets to visit the courts or to contact the National Security Ministry to be further guided.