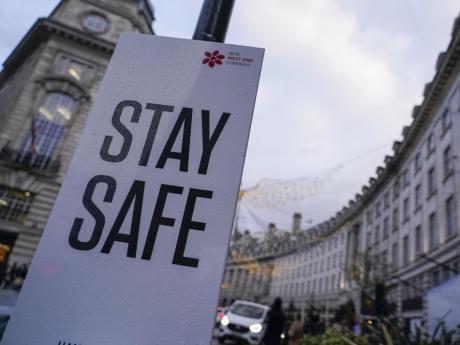 A sign reading 'Stay safe' in Regent Street, in London. A slew of nations moved to stop air travel from southern Africa on Friday, and stocks plunged in Asia and Europe in reaction to news of a new, potentially more transmissible COVID-19 variant.

LONDON (AP) —
Britain became the latest country Saturday to report cases of the new potentially more contagious omicron variant of the coronavirus as governments around the world sought to shore up their defences by slapping restrictions on travel from nations in southern Africa.

Amid fears that the recently identified new variant has the potential to be more resistant to the protection offered by vaccines, there are growing concerns that the pandemic and associated lockdown restrictions will persist for far longer than hoped.

U.K. Health Secretary Sajid Javid confirmed that two people have tested positive with the omicron variant and that the cases are linked and related to travel from southern Africa.

One is in the southeastern English town of Brentwood, while the other is in the central city of Nottingham.

The government had earlier said one of the locations was Chelmsford, and it didn't give any reason for the change.

Javid said the two confirmed cases are self-isolating alongside their households while contact tracing and targeted testing takes place.

That means anyone permitted to arrive from those destinations will have to quarantine.

“This is a real reminder that this pandemic is far from over,” he said.

“If we need to take further action, we will.”