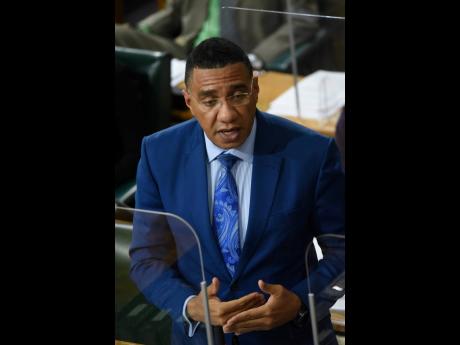 Prime Minister Andrew Holness says the country's education system has lost its ability to deliver “refined students” with the qualities being sought by employers.

He said that his concern was exacerbated by the time lost during the coronavirus pandemic, which caused the suspension of face-to-face classes for more than a year.

“We would have lost an important part of our education system with the absence of face-to-face – the interpersonal [element],” said Holness while speaking at Friday's Jamaica Labour Party (JLP) Annual Scholarship Awards Ceremony at Spanish Court Hotel in New Kingston.

Five students were awarded full scholarships and eight bursaries, chosen from a field of 300 students who submitted applications.

Holness said that from his observation, the education system was doing “fairly well” in delivering students with the requisite grades, but that the softer skills necessary to complete socio-emotional development were lacking.

Referencing the JLP's Scholarship Committee interviews conducted among shortlisted candidates, Holness said that it became obvious that there were students with great potential who excel academically but lacked a quality which he said was hard to define.

He said this absence of quality is a result of the current set-up of the education system not requiring it.

“Many of our students lack exposure,” he noted.

He said that having students compete for scholarships can serve to plug that hole in the system.

“Just by going through this process of interviews, the students would be developing these softer skills because they need it to cope.

“The truth is – employers tell you this all the time – that they get the students with the grades, but they simply just don't have the softer skills to cope in the work environment,” said Holness.

Concerns have long been raised about the education system and its failure to adequately prepare the country's workforce to confront the rapidly changing demands associated with the future of work.

Holness said while there are parts of the system which facilitate this process well, a larger part does not, noting that this must be addressed if the education system is to be transformed as the current system is short-changing graduates.

In May this year, Education Minister Fayval Williams reported that 120,000 students were absent from classes in the last academic year as teaching became accessible primarily online due to the pandemic.

The then Jamaica Teachers' Association President Jasford Gabriel indicated that the country's youth would not be recovering from the learning loss any time soon.