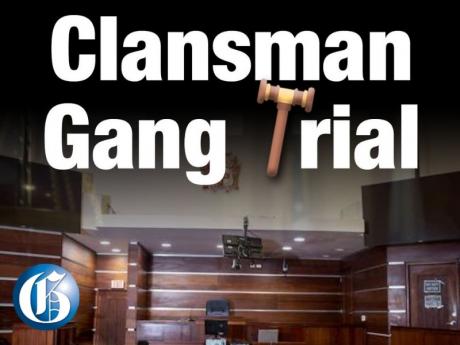 The trial is being heard in the Home Circuit Court.

Chief Justice Bryan Sykes this morning expressed shock after the chief investigator in the One Don Gang case revealed that the police had challenges obtaining telephone records from the country's two main service providers.

The detective sergeant this morning told the court that the police's Communication and Forensic Cybercrimes Department had made the request for the records but it was never forthcoming.

This was after he had testified that the prosecution's second witness had tipped off the police about illegal firearms that members of the alleged gang would be travelling with.

Two of the alleged members of the gang were fatally shot on the same day, the court also heard.

The court heard that on the day of the incident the prosecution's second witness had left his phone line opened as he communicated with the alleged gang members so that the police could listen.

The police witness recalled hearing a male and a female voice during the conversation which he said lasted for about 25 minutes or more.

It was at that point that Sykes asked the police witness about the telephone data and was told that the police only have recordings of the conversation.

"So how come there are no telephone records? Clearly, there is something that I have missed," the judge remarked.

The police witness then asked for permission to speak but the judge told him to hold on, while quipping "Mi affi digest this."

When asked further by the judge why the telephone records were not received, while noting that he did not want to say too much, the police witness said the request was made but the constabulary force encountered difficulties.

"I just need to know if it is being said that neither Digicel or Flow provided call data information when requested by the police in the context of what the police are claiming to be an investigation of a criminal organisation.

"If that is what is being said then something is seriously wrong with that," Sykes said.

"Does the law allow them to refuse to provide the information because if that is so then the law needs to be changed," the judge added.

Prior to the police witness' revelation about the absence of any telephone data on the Crown' case, which was confirmed by the prosecutor, the detective sergeant testified that he and another cop were shot at when they went to Martin Street in Spanish Town, St Catherine in an unmarked service vehicle after seeing two men on foot with weapons.

The police witness said they also spotted a brown Toyota Axio motor car but it eluded them.

The court was previously told that the Axio is called the gang's “duppy car” as it is used by members to carry out murders.

The police witness further testified that he was alerted to an incident on Garbali Drive in Spanish Town, St Catherine and when he and his colleague arrived at the location they saw the brown car and was told that two men were shot.