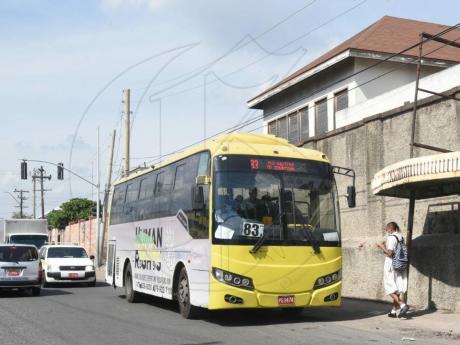 JUTC drivers withdrew their services this morning to protest the arrest of a colleague in the Corporate Area under controversial circumstances on the weekend. - Kenyon Hemans photo.

Thoms says some drivers resumed duties this morning with the remainder expected to be on their routes this afternoon.

He told The Gleaner that a meeting involving the police high command, the management of the JUTC, and union representatives was held today to discuss concerns that caused workers to go on strike.

“We expect things to be back to normal by our peak cycle which is 5 to 6 this evening. Buses are on the route as we speak. The full complement of our roll-out will be on the road to accommodate the afternoon cycle trip,” said Thoms.

The JUTC workers went on strike this morning leaving hundreds of commuters stranded.

They withdrew their services to protest the arrest of a colleague in the Corporate Area under controversial circumstances on the weekend.

The workers accused the police of using excessive force.

Speaking with The Gleaner, a driver described the treatment of his colleague as “wicked and uncalled for”.

“Di police dem wicked. No matter the offence, dem never have to pull the man out so,” he said.