No lasting benefits after three years of SOE says Golding 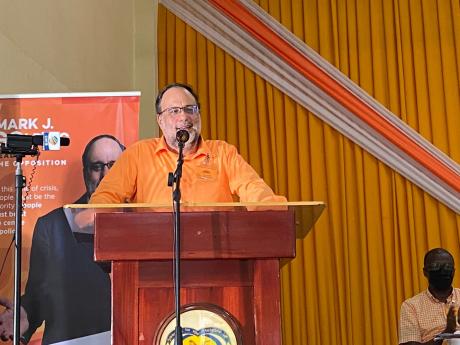 People's National Party (PNP) president Mark Golding has stoutly defended his party's refusal to support the extension of the States of Public Emergency in seven police divisions across Jamaica, saying there are more effective ways to deal with the country's crime problem.

Addressing the party's National Executive Council  (NEC) conference on Sunday at the Moneague College in St Ann, Golding said he is satisfied that the PNP did the right thing while outlining other methods that are available to the government and security forces.

Golding said that as a parliamentarian it was important to uphold the Constitution of the country at all times, as it is a sworn duty.

“I feel that for us to play politics with that and to do what is politically expedient instead of what is right in our conscience is never the right way to go,” Golding said.

“We've seen a situation where the state of emergency went on for three years, the murder rate in the country continued to be extremely high. When it was finally ended by the government, not because of us but they decided to bring an end to it and then call an early election right in the COVID spike, which was their decision. But no lasting benefits have been derived from that three years of state of emergency; the crime rate has continued to be high,” Golding said.

He continued: “We believe that the time has come for a strategy with all hands on deck, supported by the government and the opposition, over how we deal with this crime problem and it must be a balanced approach, an approach that looks at crime prevention, looks at the youth, looks at early childhood education, looks at the situation in the communities where the hotspots are and provide hope for those people and better conditions of life for them.”

He said this includes the use of curfews, the DNA Evidence Act, using cordon and search, and the Zones of Special Operations (ZOSO) legislation which he said the PNP supported and helped to improve in parliament.

He further said that soldiers could support the police on the ground where necessary.

“We're fully behind that wherever it's necessary to do so. But what we cannot do is agree to the continued use of the state of emergency just as a tool to detain people for lengthy periods without charge. Thousands of youths in Jamaica went through that and ended up never being charged. There was no compensation for those youths, many of them lost their jobs.”