‘Let’s end AIDS as a public health threat in Jamaica’ 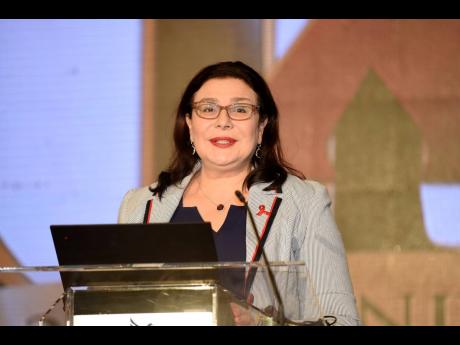 The Joint United Nations Programme on HIV/AIDS (UNAIDS) is leading the global effort to end AIDS as a public health threat by 2030 as part of the Sustainable Development Goals. Jamaica is one of two UNAIDS priority countries in the Caribbean. While the island has a concentrated HIV epidemic, its key populations continue to be disproportionately affected.

Since the first cases of HIV were reported more than 35 years ago, 78 million people have become infected with HIV and 35 million have died from AIDS-related illnesses. Since it started operations in 1996, UNAIDS has led and inspired global, regional, national and local leadership, innovation and partnership to ultimately consign HIV to history.

According to Manoela Manova, UNAIDS country director, HIV is a development challenge and requires all stakeholders and government sectors involvement to address its complexity.

“UNAIDS is advocating for multisectoral partnership and cooperation in order to achieve the goal of ending AIDS as a public health threat in Jamaica. This means reducing the new HIV infections and AIDS related deaths to 90 per cent compared from 2010 to 2030,” Manova said.

UNAIDS, she said, places people living with HIV and people affected by the virus at the decision-making table and at the centre of designing, delivering and monitoring the AIDS response. The organisation also charts paths for countries and communities to get on the fast-track to ending AIDS and is a bold advocate for addressing the legal and policy barriers to the AIDS response.

Manova said in 2020, to accelerate the progress towards reducing stigma and discrimination, Jamaica became one of the first countries to join the ‘Global Partnership for Action to Eliminate all Forms of HIV-Related Stigma and Discrimination’.

“The initiative combines the power of governments, civil society, donors, academia and the United Nations and focuses on ensuring coordination, coherence, and accountability among stakeholders to bolster efforts to end HIV-related stigma and discrimination,” Manova said.

She said the initiative reaches beyond the health sector to address ignorance and bias in education, the workplace, the justice system, families and communities.

“The partnership has been able to provide technical support to Enabling Environment and Human Rights Department of the National Family Planning Board, and has revised and adjusted the national instruments for data collection on human rights,” Manova said.

“In addition, the initiative has also revamped the national legal and policy review committee, to develop and validate a five-year operational plan for enabling environment and human rights component in the new National Strategic Plan on AIDS, and has developed a fact sheet on stigma and discrimination and has informed the development of the new global fund country grant proposal,” she added.

UNAIDS has also partnered with various public and private sector organisations to conduct sensitisation and training on HIV and HIV-related stigma and discrimination for staff and members, and in turn they have received technical assistance for themselves and members to develop policies to address HIV-related stigma and discrimination and to participate in the stigma-free spaces.

The Ministry of Health and Wellness, she said, is implementing a pilot on social contracting, that is a mechanism for transferring government funding to civil society for delivering particular services and results. “This initiative, when successfully implemented and evaluated, will be the basis for sustainable financing of civil society to deliver services that the health sector cannot accommodate to vulnerable and marginalised and difficult-to-reach communities,” Manova said. Since the introduction of public antiretroviral therapy in 2004, access to treatment and care services has dramatically increased. Among pregnant women living with HIV, more than 95 per cent receive treatment to prevent transmission to their children.

The country, she said, is working to address gaps in linkage to care and treatment retention. The government, civil society and development partners, she said, have recognised that in order to do this they must collaborate to address the challenge of stigma and discrimination.