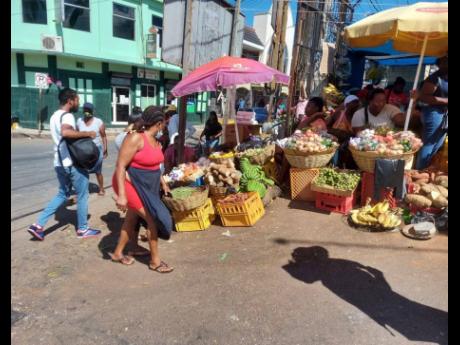 Contributed
Vendors outside the gate of the Mandeville Market.

With the increase in businesses and traffic to the central hub of the island, stakeholders in Mandeville are calling for structural development that will mitigate the current effects on centuries-old infrastructure.

Among the issues that plague the town is traffic congestion, which makes the job of manoeuvring the space that much harder, according to Sergeant Florzel Williams, who is in charge of traffic at the Mandeville Police Station.

“I see Mandeville as a 17th-century town. I have not seen any development for the past 10 years in Mandeville in terms of road development to take in the kind of traffic that passes through the town,” Williams said.

Though known as the ideal location for retirees because of its rural and suburban offerings, Mandeville, which was developed in the 19th century, is a metaphor for confusion, overcrowding, and disorder during peak-hour traffic, the sergeant said.

“If you observe, there are [little to no] sidewalks in Mandeville, with the exception of Caledonia Road. Persons have to be walking in the road, which means that people and vehicles have been left to use the same space,” Williams told The Gleaner.

He indicated that the issues of inadequate delivery bays for commercial entities and parking spots for customers are other issues that create logistics nightmares for the police.

“We understand commer-cialisation runs the town, and we have to use our discretion as police to allow them to park and deliver. There is no organised delivery day, and the police cannot organise delivery days. Parish development and these things rest with the parish council,” the senior cop said.

But plans to develop the town, according to the Chairman of the Manchester Municipal Corporation (MMC) and Mayor of Mandeville, Donovan Mitchell, have been on the books for years and will take billions of dollars to be realised.

“We can expand the town, but we would have to take [some] services outside of the town. Some years ago, a team was looking at Hatfield to Kingsland in Spur Tree because that is where we had some lands. But this would take billions of dollars and a government with forward planning to develop this town,” said Mitchell.

The mayor said the next best option to ease traffic congestion, which is being looked at by the MMC and the National Works Agency, is to transform some of the roadways into one-way routes.

He said that though developers have, in the past, got away with disregarding stipulations of the development order, new buildings must be in full adherence to the protocols, with owners clearly outlining parking provisions, among other features.

“We have been in dialogue with NEPA (National Environment and Planning Agency), so in order to expand the town for commercial buildings, we can have a rezoning of the town. Some of the roads we are looking at are New Green, Greenvale, Ward Avenue, Manchester Road, and Villa Road. If we are to stem migration, we have to create employment and create the space for commercial buildings.”

As the 2023 proposed completion of the South Coast Highway approaches, traffic to the parish is expected to increase significantly, pushing more business ventures into the town.

Following the closure of the bauxite companies in 2009, President of the Manchester Chamber of Commerce (MCOC) Simone Spence Johnson said there have been noted increases in the number of businesses that have been established to date.

“We have agroprocessors, small manufacturers, retailers, people in the food industry, car marts, financial institutions, construction companies and equipment-rental spaces, among others. But a lot of the family-owned businesses, which include [Chinese-owned stores] really take centrestage,” Spence-Johnson said.

Since the pandemic, Spence-Johnson revealed that more businesses have made technological advancement, bringing about the need for even more delivery services.

However, while there continues to be underutilisation of the technology and innovative methods by other entities, the MCOC president believes that the adaption to changing times is what is necessary for sustainability and crowd-control logistics.

But while the established business owners are easily regulated, informal business operators such as vendors who ply their wares on the side of the road continue to be a sore topic for the municipal police, who are also tasked with maintaining order.

“You have the rogue vendors from out of parish come and set up mannequin, even on the road side, and sometimes the metro give them a pass, but them abuse it and lose it. Sometimes if you allow these vendors to have their way, they will go out in the middle of the road. But law and order has to prevail,” said a vendor in the Mandeville Market.

Mitchell said plans are being fine-tuned with the municipal police to maintain order for the Christmas season.

Additionally, with calls for the expansion of taxi parks, which are bursting at the seams and adding to the woes, Mitchell told The Gleaner that that, too, is part of the plans “on the books”.

“For our east-bound taxis at the Nashville park, we are looking to expand that and relocate the Porus taxi park,” the mayor said.

“Outside of that, there aren’t much lands in the town centre that you can expand to create a new taxi park.”

The traffic police are expecting that privately owned lots in the town will be used as temporary transport centres to reduce traffic in high-traffic weeks to come until there is a permanent fix.