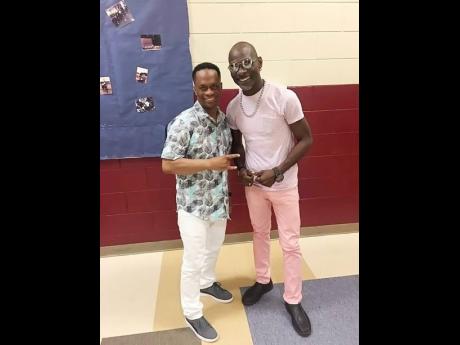 Popular actor and director Garfield ‘Bad Boy Trevor’ Reid and Stede ‘Jookie Jam’ Flash, who made his name in the Shebada plays, have brought more than their fair share of drama and laughter to the theatre scene. But, it’s not all fun and games for the pair. Off-stage they do get quite serious and oftentimes quietly demonstrate their philanthropic side.

Through their Brothers for Life Foundation, they recently donated a number of computer tablets to the Maxfield Park Primary School in Kingston. This was not a one-off; it was simply a continuation of the work that they have been doing to foster positive growth in students.

“We have been doing this for years by going into schools and giving free performances and motivational speeches. And, as a past member of the National Secondary Student Council, which at one time I was the vice president for one of the regions, it’s only natural that we keep the spirit going. I have kids who attend school, and I know the struggles,” Bad Boy Trevor told GoodHeart.

Jookie Jam added that giving back is one of the things that they do.

“We have been doing stuff for schools for a long time now, not as in donations of tablets, but we have conducted seminars on acting and the entertainment business. We know that the kids are having a huge problem getting access to their schoolwork owing to a lack of equipment, so we decided to do this drive to raise funds so we could source the tablets. With our foundation, we are always giving back,” he explained.

According to them, it was relatively easy for them to decide on Maxfield Park Primary School for this charitable donation.

“The principal and us are like family. Her brother, Richard Halloway, is one of our theatre brothers as well, so we find it a great gesture to donate and contribute energy to her school,” Bad Boy Trevor said.

He shared that he and Jookie Jam are not just theatre brothers, their history “go way back”. With them enjoying a wide fan base scattered across the world, it was a no-brainer for the two to start their own foundation and let their light shine as they “help all the people they can, in all the ways they can”.

They noted that although the pandemic has affected them, it was not an excuse not to give. It was simply about finding creative ways to make life a little easier for even one person.

“For theatre, the COVID-19 has given us a hard blow. We have been out of work for nearly two years and still don’t know what the future looks like. I did some online plays, and they got some support from the diaspora, but Jamaicans love to get the live plays, so we didn’t get much support a yard. But I am now doing movies. As you all know, my movie Demons Run Miami will be out January 1, 2022,” Bad Boy Trevor shared.