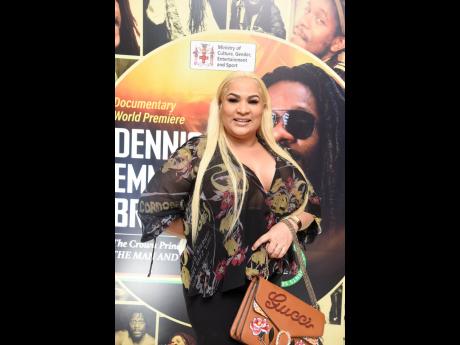 File
Carlene Smith has had a long history of opening her heart and purse to others.

Whenever you see Dancehall Queen Carlene Smith trekking through a community on her Instagram Live, you know she’s about to make someone’s day through charity.

Her recent trip took her to see dancehall veteran Tiger for whom she, alongside her team at Whirlwind Entertainment, are hosting a fundraiser on December 26. But as the pop culture trendsetter informed The Gleaner, she’s been doing good long before there was social media.

“People who went to school with me, any school that I’ve even been, would tell you I’d give lunch money to children there that didn’t have it, and I’d give my clothes and stuff to people who didn’t have it, too,” she said. “As a teenager, I was part of a treat to give back in McGregor Gully with a friend of mine where I would be the organiser for it, making sure everybody gets something.”

THE GOOD SHE HAS DONE

She lightly goes over other charitable initiatives like Christmas treats and a football event, and it is clear that she is not entirely comfortable with speaking about the good she’s done. This is supported by her history of avoiding press coverage for her various projects. While she still doesn’t share it all on social media, she said the platform has helped her to inspire others to give back.

“Right now, I’m doing Sassa’s house with money out of my own pocket with the help of some close friends,” she said. “I haven’t gotten anything yet for him publicly, but it’s not about that; it’s about helping somebody to feel better about themselves, living better, being happier. In terms of the life that I’m living, I’m fine, I’m blessed, I have gratitude, and I’m happy. I’m not rich; I’m nowhere close. Sometimes I can’t even pay my own bills, but I worry about others.”

She linked her generosity gene to her mother’s, noting that although she didn’t grow up under her mother’s roof, she’d always witness her helping and providing meals for others.

“I’d spend time with her, and there [were] tons of people at her home, so I think that was instilled in me from yay high, and with that said, I was fortunate enough to not be in need of anything and for that, I knew I always had to share.”

With greater resources as the island’s première dancehall queen in 1992, she was able to amplify her mission.

“I took on the Mona Rehabilitation Centre (now the Sir John Golding Rehabilitation Centre), which was one of the places I would just go as a child. I think my dad used to visit somebody there, I don’t remember, but I kept going there. When I could afford to, my first major donation was to Mona Rehab, where I bought four wheelchairs. When I was doing Sashi (former three-day music festival), we gave them a van which was the only van at the time that would take the persons with wheelchairs. I’ve never made a big deal out of these things because they came from my heart.”

Smith also became actively involved in HIV/AIDS awareness and safe sex education as an ambassador for Slam Condoms. She shared that she visited a hospice for AIDS patients in Montego Bay and another in Uganda, where she distributed condoms, spoke with and embraced patients.

“They asked me if I wasn’t afraid, and I said no. I have more sense than that to know that’s not how the virus spreads. My interest was always just to help whoever I could, wherever I could.”

LIVE WHAT THEY LEARN

With a child of her own, she’s also helped with funding school expenses for other children, even fostering a child at one point. Smith believes that children live what they learn and said Crystal, her daughter, shares the same passion for helping others. From as early as four, she said Crystal showed selflessness, coming home from school one day without her shoes and uniform, explaining that she gave them to a student who was without.

Smith said she has considered establishing a formal foundation, even saying she started one back in the day, which got pushed to the side because of her busy schedule. Institution or not, she remains content with and committed to serving others.

“It never stops, and I will never stop,” she said. “Even when I’m in need myself, I still give. Anybody who knows me will tell you ‘she will give you her shoes’ — which I’ve done more than once — ‘and go home barefoot’. Character is something that develops, and my character has been developed as a child into loving, caring and giving, so I can’t change.”