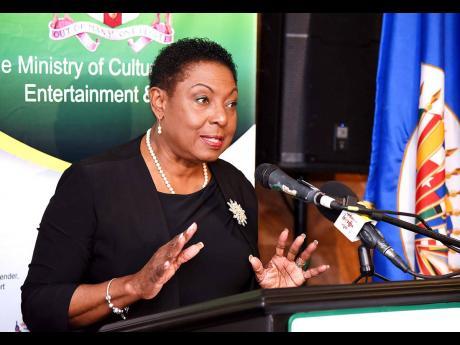 Grange: "We’ve had a very good response in a very short time and we have now surpassed our target for application." -File photo.

“We anticipated about 1,000 applications for the individual grants of $60,000 each to members of the entertainment, culture and creative industries. We've had a very good response in a very short time and we have now surpassed our target for applications,” said Grange in a statement today.

The Ministry announced the opening of applications for s on December 17, 2021.

Since then, it has received nearly 1,400 applications from a wide cross-section of practitioners including sound system operators, musicians, singers, sound engineers, stagehands, film and video producers, writers, journalists, among others.

“Up to yesterday afternoon, 331 members of the entertainment, culture and creative industries had already received their grants, which means that so far we've paid out more than $19 million. By Wednesday, an additional 170 people should see the grants in their accounts. That would take us to 500 paid out. And then we would have another 800 or so applications left with the majority of those already processed and have met the criteria, and will be awarded grants,” said Grange.

The award of individual grants is being funded by the $90 million special support package for entertainment, culture, and creative industries practitioners.

The special support package will also benefit organisations in the sectors.

Grange will announce details of the support programme for organisations at a later date.