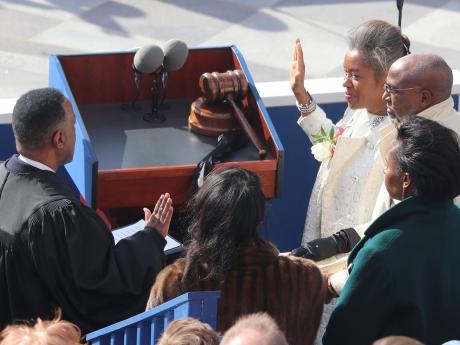 Winsome Earle-Sears (right) being sworn in as the 42nd lieutenant governor of the Commonwealth of Virginia, USA.

WASHINGTON D.C.:
Jamaica-born Winsome Earle-Sears is the new lieutenant governor of the Commonwealth of Virginia.

Earle-Sears is the first woman to serve as a lieutenant governor and the first black woman to hold a statewide office in the Commonwealth.

The lieutenant governor officially serves as president of the Senate and presides over it and also serves as a member of several state boards, commissions and councils.

Her oath of office was administered on the steps of the State Capitol building in Richmond, Virginia on Saturday by retired judge of the 13th Judicial Circuit of Virginia, Richard D. Taylor, Jr.

Jamaica's Ambassador to the United States, Audrey Marks is proud of Earle-Sears' elevation.

"You have done so with uncommon grace and have in the process drawn renewed, decidedly positive attention as an exemplar of Jamaicans here, representing respected models of responsible citizenship and as able, contributing members of the American society," she said.

Marks said she was confident that Earle-Sears' leadership will be an inspiration of the highest ideals.

Earle-Sears was honoured to be sworn in as the first woman to the office of lieutenant governor in Virginia.

She was born in Kingston, Jamaica and has collaborated with the Jamaican Embassy in the US to improve trade, education and tourism.