Retired firefighter gets citation for service to St James 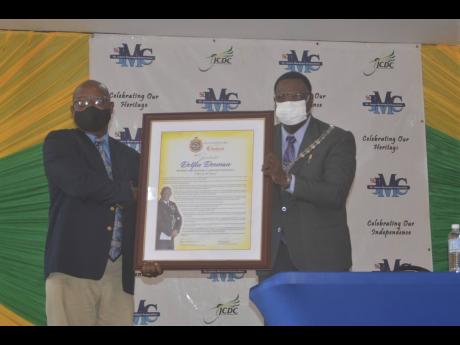 The St James Municipal Corporation (StJMC) gave now-retired firefighter Dolfin Doeman a noteworthy send-off during its first monthly meeting for 2022 with a citation praising his contributions to the Jamaica Fire Brigade (JFB) since he first enlisted in 1982.

Doeman, who formerly served as superintendent of the St James Fire Department, expressed pleasure at having got the opportunity to serve the parish of St James and the wider JFB organisation.

“As I proceed with my retirement, I want to pray God’s continued blessings on this municipal corporation, and again, I am thankful to have been given the opportunity to serve and to have served well,” he added.

A native of the neighbouring parish of Hanover, Doeman was recruited to the St James Fire Department, then known as the St James Parish Fire Brigade, as a trainee firefighter in November 1982.

During his 40 years of service since that time, Doeman was a recurring attendee at the regular monthly meetings of the StJMC, giving regular updates on the St James Fire Department’s efforts to serve the parish’s citizens and save lives from fires and other disasters.

Doeman has also been proactive in seeing to the care of the men and women under his command, including advocating for recent efforts towards the construction of the Barnett Street Fire Station in Montego Bay.

That facility, for which ground was broken in 2008, will house 250 firefighters upon completion and will replace the previous 50-year-old fire building, which was demolished in 2006 after being deemed structurally unsound.

In Doeman’s citation, which was read aloud by Councillor Dwight Crawford of the StJMC’s Spring Garden division, Montego Bay Mayor Leeroy Williams praised the veteran firefighter for his professionalism and dedication to duty.

“The StJMC recognises you as the epitome of giving service above self, someone who is a true servant of the people and an astute leader. As you gracefully demit office as Superintendent of the St James Fire Department, the parish will always be indebted to you for your years of service, dedication, commitment to service, and humility that you exhibited as a firefighter and as a human being,” Williams said in the citation.

Doeman is succeeded in his role by Winsome Grant, currently Acting Superintendent of the St James Fire Department. Grant had previously served as the first female commander for the JFB’s St Elizabeth Division.