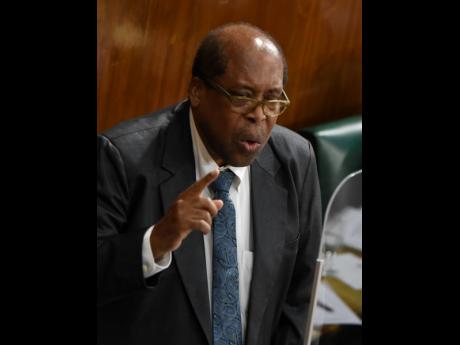 Veteran trade unionist Senator Lambert Brown has challenged the Andrew Holness administration to quickly pass legislation that would provide greater protection for workers employed on fixed-term contracts, who, he says, are being denied basic wage benefits by their union-busting employers.

Brown, in his presentation to the State of the Nation Debate on Friday, said it made no sense for a company which had a long-term service contract to engage workers on short-term fixed contracts, which excludes them from participation in pension schemes, access to union representation, redundancy payment, security of tenure and sick leave, among other things. This is unfair, since they are doing the same level of work as their full-time colleagues, he argued.

He said hotel and bauxite workers, as well as public-sector employees, are being abused by employers who continue to undermine aspects of what he described as the progressive labour laws enacted by the People’s National Party administration of the 1970s.

“I call on the Government to do what the United Kingdom government has done, pass a law protecting fixed-term contracts which says that if somebody is employed on a fixed-term contract on an ongoing basis, over a period of time they must be treated as being permanent, and the company must come and say there is an objective reason for you being on a long-term contract.”

Pointing out that this practice also exists in South Africa and Australia, he asked, “So why Jamaica can’t do it?”

The trade unionist also charged the Government to act on a recommendation by one of its longest-serving ministers, Audley Shaw, for the minimum wage to be raised to a more realistic $12,000 per week. In January 2016, a week after the House of Representatives voted to move the minimum wage to $6,200 per week, Shaw, who shadowed the finance portfolio, said Jamaica should move the minimum wage as soon as possible to US$5,000 annually. At the time, this would have translated to a mean salary of $604,144 per annum, or $12,586 per week, for the lowest-paid workers.

In making the case for a minimum wage increase, Shaw had argued that the devaluation of the Jamaican dollar had made the purchasing power of Jamaicans weaker.

Now that the Jamaica Labour Party is back in government, Brown wants it to make good on the recommendation of Shaw, who was handed the reins of the transport ministry in a recent Cabinet reshuffle.

Brown cited the extra duties taken on by security guards, who are now mandated to check the temperature of people visiting workplaces, as well as administer hand sanitiser, as justification for the increase. He challenged Minister of Labour and Social Security Karl Samuda to make good on enacting the minimum wage increase.

“I am simply going to call on the minister of labour to forthwith increase the national minimum wage. Let us do something that is in the remit of the Government to do, because the studies have been done. Increase the minimum wage forthwith.”