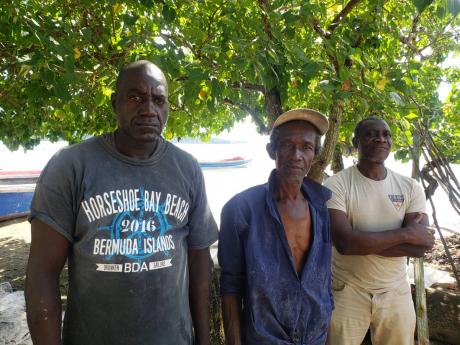 shanna monteith
Fishermen of the Port Morant Fishing Village in St Thomas and past participants in the St Thomas-based Regatta. From left: Lanzurt Hemming, Herman Whyte and Clifton Whyte.

A common memory shared among the older residents of Port Morant in St Thomas is of the once-annual Regatta that would bring them all together.

Established in the 1960s, the event took place on the shores of the community’s fishing village and featured several sporting activities, including the much-anticipated boat races across the Bowden Harbour.

The event, according to residents, was one of the binding forces in the area that encouraged camaraderie among the various neighouring districts.

Past participants, and residents in general, are hopeful that the much-talked-about Regatta will one day find its way back on their shores.

“I was there from the beginning of Regatta. We used to have boat race, swimming race, bun-eating contest, beer-drinking contest, tug of war … all different kind of activities. It was a whole day of fun. Children and others would come out to enjoy the beach, swim, and things like that,” said Herman Whyte, a fisherman.

The face of the elderly man, who told The Gleaner that he was one of the drivers in the engine boat races, lit up as he reminisced on the years gone by.

“We would race from here and go around the harbour and come back, that’s one whole mile. There was a lot of prizes and surprises for us if we won. It felt nice, and we were so excited … People from all ‘bout come … mi would love to see it come back, like now,” Whyte said.

His colleague, Clifton Whyte, who proudly declared himself the defending champion of the swimming competition, shared in the memory.

“It was just pure fun. I was one of the swimmers who win races across the harbour. I think it was the Social Development Committee (SDC) that was responsible for it, but lack of sponsorship made them stop it. They would need help if it is to come back,” Clifton Whyte said.

Proudly declaring himself as the champion of the swimming which last took place in the 1980s, the man boasted that should the event resurface, he would be ready to defend his title.

Parish Manager of the St Thomas SDC, Lorian Peart-Roberts, noted that though Regatta was before her time, she is willing to have conversations with the necessary stakeholders to revive the event in the area.

“Anything for economic development. We are more than willing to sit with fisherfolk to see how best we can formulate ideas and implement them,” she said.

Her sentiments were shared by the president of the Port Morant Community Development Committee, Pansy Murphy, who spoke highly of the expected impact of such an event.

“We are interested in seeing this come back to life. This would see to the togetherness of residents, events that people can be attracted to and get involved in. I see small business operators being able to get earnings from it also; and the attraction would encourage people from adjoining communities to come along and build relationships,” she said.

Murphy, who noted a dying community culture due to the lack of activities happening in Port Morant, coupled by the onset of COVID-19 which dampened public gathering, shared that a Regatta would serve people of all ages.

She continued, “Children and young people would have something to entice them, and the older folks may come out with their chairs down by the sea and see what’s happening. It’s not something for one set of persons, its something for everybody. Even churchgoers could attend and be entertained.”

Not only would the activities revive community spirits, but according to fisherman Lanzurt Hemming, Regatta could save the Port Morant Fishing Village from dying.

“It brought a lot of excitement and people to the beach. We almost lost right now, so it would help us to rise and be found again. The beach almost empty and a fight we fighting to bring it back, so a move like this would be very good right now. It would uplift the place,” he said.