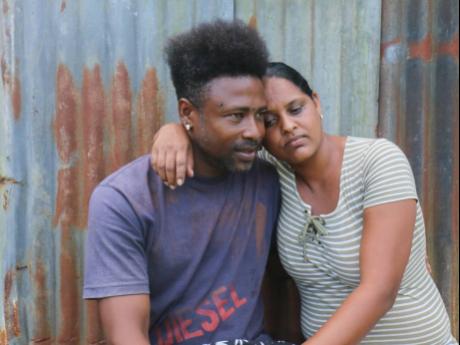 Ashley Anguin
Jeffery Barron and his wife Rozanna at their temporary home in Dumphries, Trelawny. 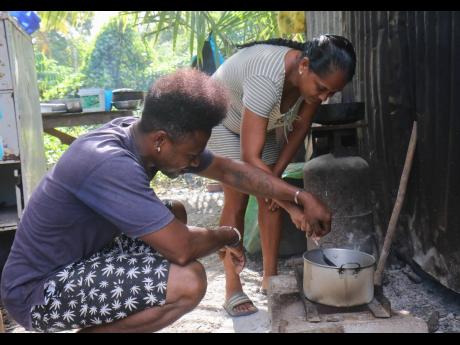 Ashley Anguin
Jeffery and Rozanna Barron prepare a meal on a makeshift stove at their father’s temporary home in Dumfries, Trelawny. 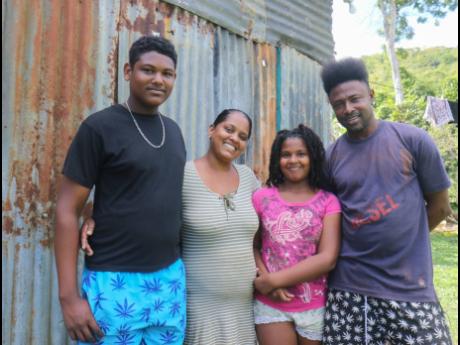 A BUSH-INFESTED path which can be quite treacherous leads to the partially burnt one-bedroom zinc shack which now houses Jeffery Barron.

In his best days, he resided in a three-bedroom house with his family, but on June 24, 2019, the tale of their living nightmare began.

Thirty-nine-year-old Barron claims that after years of constant terrorism by so-called landowners, which led to a land dispute, his home was burnt down.

The matter is before the courts and is now pending a ruling.

Presently, he sleeps on a makeshift sponge mattress and is kept cold at nights due to the dew that falls on him. His wife and children are living miles away with other relatives because of the current living situation.

Barron told The Gleaner that being separated from his family for almost three years has been stressful.

“Please, I just want the help for my children. We have absolutely nothing and they don’t deserve this. I can only spend a few hours with them on Sundays and it a depress mi. This separation affects them but they understand the circumstances,” an emotional Barron said.

Big water jugs placed together neatly in the front of the zinc shack is what Barron uses as a seat for comfort, while the children sit on tarpaulin placed on the ground. A kitchen-less area, both parents prepared the little they had for dinner on a wood fire.

Inside, the sun filters through the many holes in the zinc. Few pieces of clothing are scattered and empty bottles to catch water is a depiction of the nightmare they can’t seem to wake up from.

Rozanna Williams-Barron, his wife, said all she wants is her family to be together again and is grateful for any help that will come their way.

“I want my husband back. I am devastated as it has been a very difficult two years being separated as a family. My son needs my husband as a role model and as for my daughter, she is a daddy’s girl,” she said.

“Jeffery and I have been together for 16 years and married for nine years. We have to ensure we have trust and communication to keep our relationship alive,” Williams-Barron told The Gleaner, while holding back the tears.

As for their 15-year-old son, he lost all his animals in the fire and both parents expressed that he has been psychologically affected and they are extremely scared about not knowing what is on his mind.

“Honestly to God, we don’t want him to grow up with a revengeful heart. He is very quiet, especially since that day. After the fire, a nail pierced my foot so I couldn’t walk for two months because I am diabetic. The doctors told me I would lose my foot but my son is my rock. He would catch wood fire and cook food for me and his sister because we lost everything. His studies and classes are also affected,” Williams-Barron shared.

“As for my daughter, she is affected but not as much because she was too young to understand. I can only remember she grabbed her chest and said ‘Mommy, mi honour roll pin gone in the fire’. That broke me because that pin was given as a reward to her being an honour roll student,” Williams-Barron said.

Barron claims that injuries were sustained during an altercation with the said persons who burnt the house flat.

“Mi lose millions in equipment. I am working at a print shop now because I can’t lift anything heavy. A vein near my spine was damaged and surgery to fix it will cost $154,000. It is a 50/50 chance that I can be crippled if I do it. I don’t want that for my family because nobody won’t be able to help so for now, I will live with the pain,” he said. “I have constant pain and breathing problems because of this injury.”

Barron, eager for help, stated he has his mindset on building a new home for him and his family to be reunited.

“The lady I speak to said I can get help building a concrete house, but I need to come up with some money. So I changed the land documents to lease and sell for $500,000. I don’t know where and how I will get that money because injuries slow me down and mi frustrated. I wrote a letter to my member of parliament to assist me with $100,000. I was told by his office that they are willing to assist with material, but not cash. The OPM (Office of the Prime Minister) gifted me two children’s beds as well,” he admitted.

According to Barron, he believes the state failed him after being unsuccessful in getting any real help after reaching out.

“Every day is a new story with some of the entities. Either mi not getting some money owed to me or they don’t have my claims on file. Sometimes a different person mi have to deal with so the process has to start over. Too much running around and I am running out of patience. This stresses me and I just want the best for my children,” Barron said.