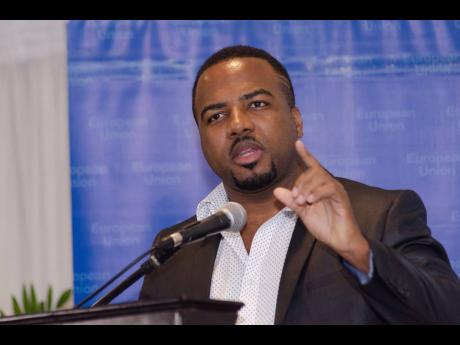 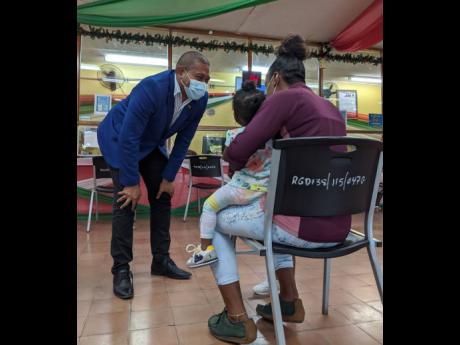 Photo by Sharlene Hendricks
Minister without portfolio in the Office of the Prime Minister, Floyd Green, greets a mother and child waiting for service at the Registrar General’s Departement during a tour last Friday.
1
2

Roughly four in every five Jamaicans now have their father’s names recorded on their birth certificates – a massive improvement, according to the Registrar General’s Department (RGD).

RGD CEO Charlton McFarlane told The Gleaner last Friday that decades ago, half of newborns were being registered without a father represented on their birth record.

“Up to last year, only 20 per cent of fathers did not have their information on their child’s registration. But 40 years ago, that number would have been higher, when it was about 50 per cent. From the 1970s up to 2020, it’s a massive improvement,” said McFarlane.

“It’s now up to about 78 per cent, so we have gotten better over time,” he added.

The improvement has been credited to increased public education and the RGD’s move to allow members of the public to retroactively add their father’s particulars to their birth record.

Bedside registration has been another factor, said McFarlane.

“The rationale behind that is that because in the past, before we were doing bedside registration, the mothers would be the ones who would have to come in and visit the RGD office or a local district registrar and do the registration, but because our officers are now in the hospitals and on the ward, we are able to dialogue with the fathers when they come to visit the mothers before they’ve been discharge,” said the RGD CEO. “It was never the intended purpose, but it is one of the benefits.”

McFarlane noted that much of the RGD’s work has been made easier, having to offer genealogy services in settling estate matters and other issues requiring proof of paternity.

“What you find is that persons who push to add their father’s name after the fact do it because the father died. They know their fathers; it’s just that the name is just not on the document. So, they add it because when the father dies and they’re supposed to get a piece of land somewhere or the will is read and there is some inheritance, they have to show the evidence that this person is your father, and that evidence is the birth certificate,” explained McFarlane.

Others are moved to update their records to facilitate the filing process when migration plans are afoot.

The development comes amid debate around high levels of paternity fraud in Jamaica and a recent announcement by St James Central Member of Parliament Heroy Clarke, who in his contribution to the State of the Constituency Debate in Parliament last November, indicated that he planned to bring a motion for mandatory DNA paternity testing at birth.

As for making it mandatory to provide the father’s particulars when registering new births, McFarlane pointed to the current Registrations (Birth and Deaths) Act, which does not require such information at birth.

“I don’t know what’s the rationale behind why it is not required, but as much as we can add the father’s name after the fact, the mother has to consent,” said McFarlane.