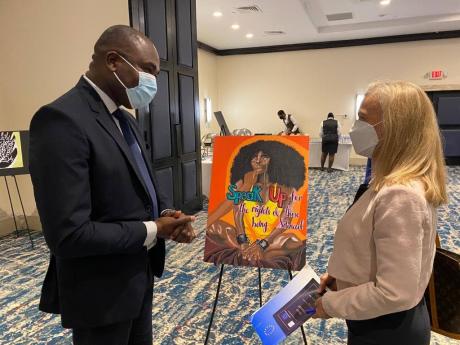 Minister of State in the Ministry of National Security Zavia Mayne in discussion with Ambassador Marianne Van Steen, head of European Union Delegation to Jamaica, at the award ceremony for the Artwork for Freedom, Stop Human Trafficking Competition held at The Jamaica Pegasus hotel in Kingston on Saturday, January 22.

Minister of State in the Ministry of National Security Zavia Mayne says the Government of Jamaica will continue its thrust in combating the scourge of trafficking in persons (TIP) through the appropriate legislations and necessary legal actions.

Speaking on Saturday at the award ceremony for the Art for Freedom, Stop Human Trafficking Competition at The Jamaica Pegasus hotel in Kingston, Mayne stated that all steps taken in the fight against human trafficking are geared towards improving Jamaica’s Tier 2 ranking.

“Significant steps have been taken by our Government to increase the budget for anti-trafficking. We have also increased our efforts to investigate, prosecute and convict traffickers, including officials who may be complicit in human trafficking in Jamaica,” the minister said.

In addition to the budgetary support, Mayne said that amendments have been made to the Trafficking in Persons (Prevention, Suppression and Punishment) Act, 2007. “The amendments are to ensure that penalties that were commensurate with those for other serious crimes are applied to persons who are convicted for the crime of TIP. We have removed the option of a fine as a penalty for anybody who is convicted of the offence of TIP, and increased the monetary fine for persons who may be convicted of obstructing officers in the lawful execution of their duties to rid our country or reduce, if not eliminate, the scourge of human trafficking that is on the rise,” Mayne noted.

He added that front-line workers, including police personnel, customs officers, immigration officers, healthcare workers and labour officers are being trained to identify human trafficking and enforce the law accordingly.

Mayne said that the sensitisation of parents, teachers and students is significant to increase awareness of trafficking in persons and, most important, how they can protect themselves from becoming victims of human trafficking. Key to this has been the publication of a TIP handbook, designed to increase the public’s knowledge on various elements relating to TIP, including screening tools, referral mechanisms, definitions and indicators.

“Human trafficking is a most heinous crime and is likened to modern-day slavery, and none of us should ignore it,” Mayne emphasised.

Children, especially those in rural communities, are the most vulnerable to this type of crime. As a result, the Government consequentially amended the Child Care and Protection Act with the passage of the TIP (Amendment) Bill, 2021, which removed the option of a fine as a penalty for persons who are convicted for the offence of trafficking in children.