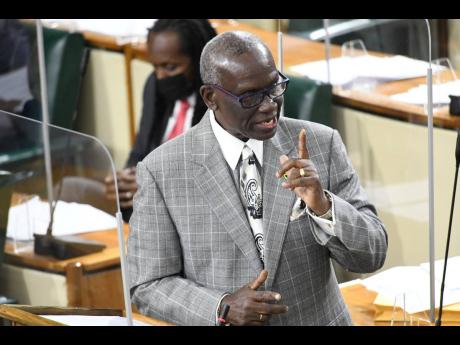 THE 40 residents at the Hanover Infirmary, made up of 18 females and 22 males, will be gifted with a new kitchen in a few weeks.

The original kitchen at the facility was ordered closed by the Hanover Health Department, because of its condition, and a work plan given to the administrators at the infirmary, with an allotted time within which they were to correct the faults identified by the health personnel.

A combination of COVID-19 and adverse weather caused a halt to the work at one point, but repairs picked up in March 2021.

On the final leg of his three-day tour of projects in the western parishes of St James, Westmoreland and Hanover, Minister of Local Government and Rural Development Desmond McKenzie, visited the infirmary and expressed satisfaction at the progress made on the construction work taking place, noting that it was now 75 per cent complete.

“The work has been going at a brisk pace. There has been a little hitch there because of COVID, but I am satisfied so far with the state of the work and we should be up and running in short order,” McKenzie stated during an interview following his tour of the facility.

Pointing out that $12 million was allocated for the construction of the kitchen, McKenzie expressed hope that the cooking area will be completed within budget, while noting that the equipment for use in the facility is already in place.

“As soon as the construction is completed, we will be moving in the equipment. This kitchen will bring an added and new meaning to the infirmary,” he stated.

McKenzie lauded the matron and other workers and staff at the facility, saying that the Hanover Infirmary continues to maintain a very high standard.

“I am not going to give a deadline for the completion, because the work has to be done while maintaining the health protocols,” he said. “I would rather the work last for five years more than allowing persons who are showing signs of anything to come and to infect the residents,” McKenzie noted.

Further, the minister added that there is a health policy in place for workers on construction sites on all infirmary grounds.

“This (work on the kitchen) will be done according to what has been set and, if we go over by a week, by a month, I am not going to be unhappy about that. The safety of the residents comes first,” he emphasised.