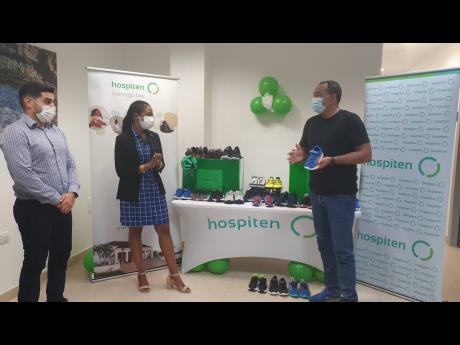 With the first phase of the initiative focusing on youth in schools, Tufton said that many children are not participating in physical activities and/or physical education classes because of inadequate footwear. He was happy that the donation would help promote the younger generation’s involvement in wellness activities.

“We just want to encourage a sense of pride in the first instance and encourage physical activity in the second instance. The response has been overwhelming and really brings a lot of satisfaction to me. So far, we have raised over 600 pairs, with 550 of those new,” Tufton said.

He said that principals of these schools have already been asked to identify children that are most needy, and they will make the donations to them.

“It is not a Ministry of Health concept, but as minister of health, I cannot deny that this has become a part of my standard-bearing mission to promote health and wellness, by promoting the concept of physical activity among our children,” Tufton said.

He indicated that the initiative is complementary to some of the initiatives already in the nation’s schools, as the health and wellness ministry continues to promote ‘Jamaica Moves’ in schools and the National School Nutrition Policy. During these campaigns, he said there had been signs of premature illnesses including diabetes and hypertension among the population, largely because they lead a sedentary lifestyle.

“They are more on the computers than they are [on] the playing field. So, this is a mission that I am taking on personally. I hope to continue with it, whether I am minister of health or not. I really believe that there is a lot of benefits to be derived from it,” he said.

During the handover ceremony, Hospiten’s commercial director Chevaughne Miller said that as part of its corporate social responsibility, the hospital is happy to give back to the community and contribute to the overall health and well-being of the children and, by extension, the country.

“This is a really good initiative. We were all children and know what it feels like to have new shoes. So, this initiative is important to us. If we have healthy children, we will have a healthy nation,” she said.

The Sole2Sole initiative was launched in January, and has seen several corporate entities and organisations making contributions. The initiative is endorsed by the Ministry of Education and Youth, while Courts Jamaica Limited (Unicomer) is a drop-off centre for those wishing to make donations.