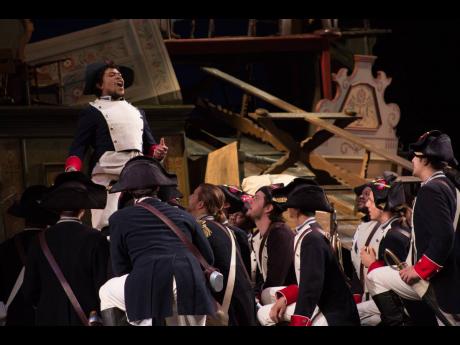 Contributed/Synthia Steiman
Jamaican-American tenor Terrence Chin-Loy Jr in performance. “I remember my dad telling me that sometimes you have to work twice as hard to get half as much, and that sometimes still feels true. I hope that in the future people will take black opera singers seriously,” he said.

Thirty-year-old Terrence Chin-Loy Jr will be making history in the traditionally white field of opera, a step that will further open doors to black performers.

The Jamaican-American will be playing the role of Henrik Egerman in Stephen Sondheim’s A Little Night Music this month.

The cast of the 1973 musical is historically white, but the performer was told by his directors that his voice was a perfect fit for the role.

“When I was doing my research, I didn’t see any black performers playing Henrik or any of the other roles. I felt that it was very momentous and something that would inspire people,” Chin-Loy said in a Gleaner interview.

“It’s really special to think that someone in the future will be looking through the annals of opera history and see my face in this role.”

Chin-Loy was born and raised in Florida to Jamaican parents and often visited the country for summer holidays.

The tenor currently resides in Arizona, where he is enrolled in an artist residency with Arizona Opera.

He is a graduate of Indiana University, where he honed his craft and earned a performer diploma.

Prior to that, he successfully completed a Bachelor of Arts in music from Yale University, where his studies were concentrated on music theory and musicology.

Growing up, he was a member of a boys’ choir and also sang in the children’s choir at First Baptist Church of Sunrise in Florida, which was attended by many Jamaicans.

While on the boys’ choir, his family learnt of an opening for an opera, which included children.

Chin-Loy recounts being “hooked” the first time he witnessed opera and is proud that he has been able to fulfil his dreams.

His mom Heather “sang in somewhat of a classical way” while his father Terrence Sr was a big fan of reggae.

“He would play music in the car all the time, and I think he really gave me the music bug through Jamaican music. When I found the kind of music that my voice could do, which was opera, he didn’t understand it at first but was always supportive,” Chin-Loy said of his dad.

His father passed three years ago but not before getting the opportunity to see him perform professionally at a few shows.

He told The Gleaner that black opera singers have made strides to make things easier for current performers, but they are still under-represented in the field.

“I remember my dad telling me that sometimes you have to work twice as hard to get half as much, and that sometimes still feels true. I hope that in the future people will take black opera singers seriously without them having to be the best of the best because that’s how it has been,” he said.

Last year, Chin-Loy joined the cast of Fire Shut Up in My Bones, the opening to the 2021 Metropolitan Opera season, which was created by acclaimed film composer Terence Blanchard.

He recently signed with an international talent agency, IMG Artist, where he will begin a series of auditions in Europe and USA.

Opera News has described his voice as one with a beautiful lyric tenor “... that kept its silken quality even when required to sing in registers that lead many tenors to shriek”.