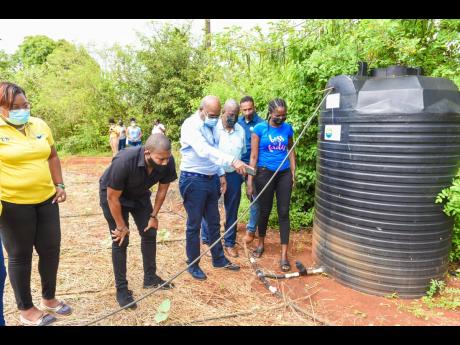 As the recovery of the tourism industry moves into high gear, Jamaica’s Minister of Tourism Edmund Bartlett says opportunities have been created for the supply chain to be reactivated.

In sync with the 27,000 visitors who landed on the island this past weekend, the largest number since the pandemic, Bartlett noted that that buoyancy enables more local suppliers to tap markets that had been stifled by a monthslong dip in arrivals.

Bartlett is clear in his conviction that the benefits of a rebounding economy should benefit local suppliers rather than importers.

“This is part of the Tourism Linkages Network programme, of building capacity among our small enterprises, to supply the tourist industry on a consistent basis of quality and quantity,” he told The Gleaner on Sunday, adding that members of the irrigation division of the Ministry of Agriculture were part of the project.

They visited one of the farms where the tanks have been installed and irrigation system was effective. Newell is the latest community the Tourism Linkages Network team has focused on.

Farmers in Lilliput and Lathium in St James have also been beneficiaries.

Enabling greater input in the tourism supply chain will reduce the foreign exchange leakage and provide more jobs and economic well-being for Jamaicans, said Bartlett. He stressed that the recovery of tourism must see the local supply chain recovering as well.

“There must not be a gap between the rate of tourism recovery and the rate of improvement and increase in our capacity to supply on its demand,” he said.

In his statement to the farmers, Bartlett appealed to banks and other financial institutions to invest in the supply side as well as the manufacturing sector to produce more.

The minister did not leave out the entertainment and cultural industries.

Bartlett estimates that with the global demand for food in the tourism industry, Jamaica would have spent somewhere in the region of about $500 billion.

“Food and drink and all the consumables,” he qualified, stating that Jamaica has a capacity to only supply 25 per cent of that amount. That equates to approximately J$125 billion, which he said was low.

Bartlett made a call for large farmers to seize opportunities in the industry.

“Get into technology and do vertical agriculture. Get into hydroponics and all these other methods that are now driving higher levels of production in the agricultural sector,” he said.

In the meantime, the tourism minister is excited about the trajectory for March.

The country’s main tourism source markets are the United States, the United Kingdom, and Canada.