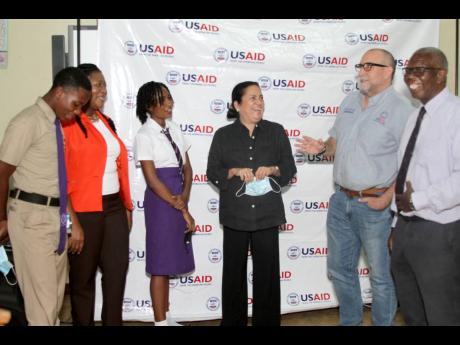 Nathaniel Stewart
Paul Teeple (second right), chief of party for the United States Agency for International Development (USAID) Positive Pathway’s activities in Jamaica, in discussion with, from left: Christopher Rowe, student; Sandra Knight-Edwards, vice principal, Foga Road High School; Kay-Ann Tulloch of Foga Road High School; Janilee Abrikian, director, PALS Jamaica and Rev Dr Learoy Campbell, programme coordinator, during the launch of PARR (Positive Alternatives to Reduce Risk), a programme at Foga Road High School for 10 students from the ‘We Can Do That!’ programme who will receive instruction in life skills and behaviour change, complemented by support from mentors, in order to equip them to craft a pathway for their lives that will result in increasing their chances for a better future. This programme is funded by USAID Positive Pathways. 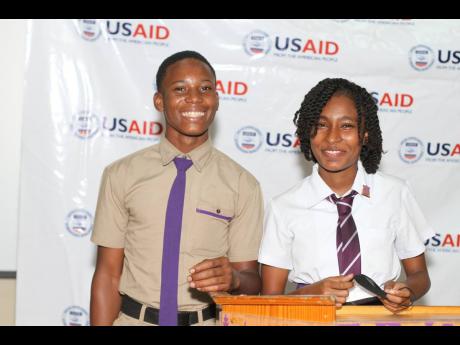 Nathaniel Stewart
Christopher Rowe and Kay-Ann Tulloch of Foga Road High School share their testimonials of the benefits of the ‘We Can Do That’ programme.
1
2

Stakeholders of the Foga Road High School in Clarendon have lauded the recently concluded PALS Jamaica ‘We Can Do That!’ programme at the institution.

The programme is a partnership between PALS and the United States Agency for International Development (USAID). The government of the United States of America has committed a five-year intervention programme targeting volatile and at-risk communities across Jamaica.

The programme targets youth between ages 18 and 24, as well as parents and caregivers. Under the programme, students at Foga Road High School were assigned a mentor over a seven-month period to facilitate their personal and behavioural growth.

Paul Teeple is the chief of party of the USAID Positive Pathways. “The idea is to have people build resilience, have people make more smart and healthy choices and choose better pathways, and we also have programmes that provide pathways towards economic improvement, to stay in school and we recognise that these types of activities that prevent violence, and promote more peaceful communities,“ Teeple told The Gleaner.

Tamara Parker’s 17-year-old son was a part of the programme at the school. Parker, who cited positive behavioural changes in her son, told The Gleaner that her relationship with her son has also improved. “I’m seeing improvement in his behaviour and in his patience level. He has grown and he’s acting more mature. Before the programme, we didn’t really speak a lot on deeper things, but now we’re getting close. He’s loving on me and playing with me more,” said an enthused Parker.

Referencing mental health, the mother said she would advise other parents to have their children become a part of the programme. “Some of them are struggling on the inside and they don’t speak a lot, so I would encourage parents to get their children involved,” she said.

Sixth-form student, Kayann Tulloch, said the programme also boosted her academic development. “It helps us to deal with anger issues, how to solve problems in our homes and help us do good in our schoolwork,” she said.

Sandra Knight-Edwards, the school’s vice principal, described the programme as one that supports positive behaviour, discipline and encourage responsibility in students. Speaking of the programme’s benefits, she said: “We are able to alleviate some of the challenges associated with maladaptive behaviour among our students, and we expect to have a more positive relationship among our students, parents and teachers.

Knight-Edwards theorised that an extension of the programme will yield even greater benefits at the institution. “We are cognisant of the types of students we have. We are also aware of the background of our students – the socio-economic [and] socio-cultural background from which our students come to us, and that information stakeholders are aware of. Therefore, this positive behavioural intervention programme should continue at Foga Road High School,” Knight-Edwards said.

The school’s dean of discipline, Michael Irving, was tasked with selecting students for the programme. Irving said selected students displayed some level of defiance or disruptive behaviour, but proudly added that he has since seen significant changes in them.

“I can think of one grade-11 student that I would have had several instances where he had been defiant and rebellious and I must comment that in recent engagement with him, I’m seeing quite a different person. There are others in whom I have seen a slow progress towards change, and I would think that it extends towards home and elsewhere,” said Irving. He disclosed that the school will be engaging the students in other social programmes to endorse what they have learned under the PALS-led programme.