NIDS to remove the need for JP to prove identity – Green 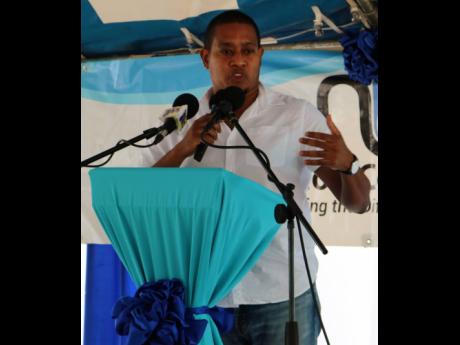 THE CONTROVERSIAL National Identification System (NIDS) will be rolled out on a phased basis as of this August, with the capital city Kingston and its sister parish, St Andrew, starting the pilot programme.

Minister without portfolio in the Office of the Prime Minister, Floyd Green, told journalists during a town hall meeting at Sam Sharpe Teachers’ College in Granville, St James, last Wednesday that five enrolment centres are to be established in Kingston and St Andrew, where people can sign up and complete the verification process for their cards.

He expects to move the programme islandwide by the end of the year and into early 2023.

According to Green, by March 31, the Cabinet-approved implementation task force, which is a joint ministerial entity he will chair, will meet.

“This task force will bring together physical agencies of government such as the Tax Administration (Jamaica), Ministry of Labour and Social Security, the NIDS project team, private sector, the banks, and we will look now at the utilisation of that system.”

He added that the focus will be on how the databases are ‘speaking to each other’, owing to the emphasis that the Government has placed on digitisation and the unlocking of that service.

He was quick to point out that one of the things they are looking to strengthen, and will be evidenced shortly when the regulations are brought to Parliament, is the fortifying of the provisions regarding the use of data.

“Those regulations will speak to third-party access, how you can access the data; under what circumstances, what are the forms, what are the authorisation do you need to get from the data holder,” he explained.

Those regulations, he said, are expected to come to the House within another three months and will supplement what was already in the act. He is convinced that all the challenges people had in terms of data protection and use should be dissipated after the regulations.

NIDS is expected to save the Government a significant amount of money, as it will replace the driver’s Licence, Tax Registration Number, the voter’s registration card, and a number of other documents used for identification.

The card, which will not be mandatory, at least initially, will remove the need for a justice of the peace to provide proof of identity.

Giving an example of how NIDS could help, particularly during a national disaster or pandemic, Green spoke of the 15,000 Jamaicans who were unable to access the $10,000 grant by the Ministry of Finance and the Public Service when COVID-19 affected the island.

“Over 15,000 Jamaicans who applied for the grants could not collect, because when they are to go to the place, they could not prove who they said they are,” he lamented.

In the absence of a holistic database that provides verification, it is difficult for persons doing business or opening accounts with commercial entities, like the banks.

A double oversight system, which is what NIDS carries, the minister said, will up the ante in relation to the security parameters that those in charge of the system have.

The ID system, is not a new idea, Green said, as it has been touted for the last 50 years. However, unfortunately, one of the challenges Jamaica has is politicians who talk a lot, and sometimes do nothing.

“So, we are now [here] 50 years later, and still having this discussion. So we’re moving ...[to] what we think is long overdue. So the National Identification System will create that one database that will be able to identify [someone] clearly. It is backed by legislation, which is the National Identification Registration Act, which says that once you have your national identification card and you show that as proof of identity, then there are no other questions.” All the information collected will be encrypted, stressed Green.