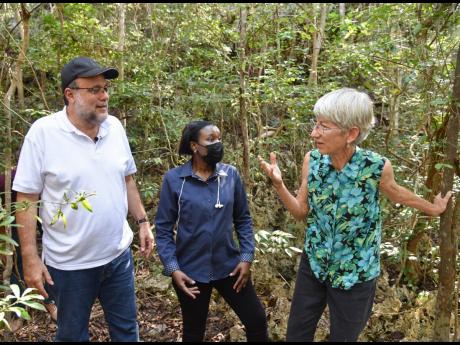 Environmental advocate Wendy Lee is warning that any attempt to approve mining in the ecologically rich Puerto Bueno Mountains in St Ann will cause irreversible damage to a national treasure.

“Whatever happens to this area, it should not be destroyed for private, short-term interests that are irreversible. If the area is destroyed, it will be a breach of my constitutional rights,” Lee stressed, obviously distraught by the lack of response from the Andrew Holness government to concerns made by her community.

The mainly unspoilt area, rich with limestone, flora and fauna, has been a bone of contention since the prime minister overruled the Natural Resources Conservation Authority’s (NRCA) decision not to approve a mining licence to private investors Bengal Development.

Numerous researches carried out by the now-defunct Northern Jamaica Conservation Association shows that the majority of the residents want the mountains preserved because they act as a buffer between the land and the coast. Moreover, the limestone formation is estimated to have been there for tens of thousands of years.

However, the prime minister has given a permit to Bengal to carry out quarrying in the area, which Opposition Senator Sophia Frazer-Binns, who has responsibility for climate change and the environment, thinks it is not too late to stop the “deleterious impact” which mining will have on the “national treasure”.

Frazer-Binns says the minister with responsibility for climate change in the Office of the Prime Minister, has indicated he intends to grant the permit, “but he has not done so as yet, so I am inviting the prime minister and his team to take a trip and do a tour of the area”.

She is convinced a fact-finding visit will cause him to empathise with the residents.

Accompanied by Lee on the tour she organised, the thick vegetation and soft limestone rocks did not allow the media much access, instead, it was a mere 20-foot distance to the entrance of the mountain that was accessible.

“I want the mountainous area properly protected, and managed for its ecological assets, which act as a buffer between the inland and the coast; for science, education, ecotourism and for uses that benefit the broad community,” said Lee, the woman who has fought hard for the environment for the last 20 years.

“That cliff is a raised reef, the life of the coral reef is embedded in the geological record, and there are caves and lots of fossil in the limestone,” she explained.

Her efforts, she says, have been ignored by the government, but she is still suggesting alternative use for the area.

Opposition Leader Mark Golding, who was on his first trip to the area, reinforced the importance of protecting environmentally sensitive areas, not just for this generation, but generations to come.

His fear, he said, was the fact that after the destruction of mining there was no coming back.

“My fears are twofold, one concerning the destruction mining will bring by eliminating the flora and the fauna; and also the economic and public health concerns to the people in the neighbouring community.”

Many of the residents in the area have had respiratory challenges as a result of previous quarry mining.

Frazer-Binns worries about the absence of a clean and healthy environment, cutting down a piece of the mountain will have.