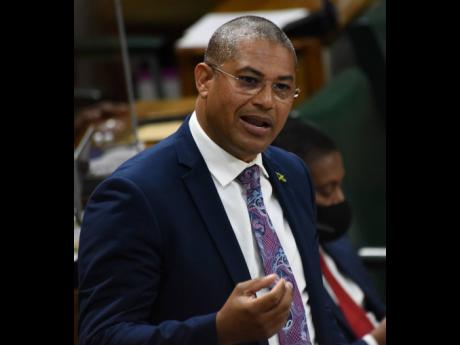 Manchester North Western Member of Parliament Mikael Phillips has slammed the $5 billion budgeted for roadworks for the period 2022-2023 as insufficient for the proper maintenance and rehabilitation of roads, mainly in rural areas.

Phillips indicated that the funding earmarked from the roadworks budget for the road maintenance – Lengthman project announced by minister with responsibility for works, Everald Warmington, last year, will compromise the sustainability of other road repair projects across country.

“We are in crisis. The Government has put the maintenance of roads on the back burner, which will leave many of our roads being in the worst condition ever.”

Phillips, who was making his contribution to the Sectoral Debate in the House of Representatives on Tuesday, challenged the practicality of budgetary allocations amid the rise in material costs and labour. “Last year the cost per ton for asphalt was approximately $13,800 compared to the current price of $15,500 per ton. Yet we are expected to spend less while we require more. It is impossible to maintain our current roadways from the Consolidated Fund. We are seeing bad roads now, worse than we have ever seen in a long time. We can build new roads but if we don’t maintain the ones we have, it will cost us more in the long run,” he stated.

Citing a finding from the National Road Master Plan created between 2005 and 2006 as a framework for road maintenance, construction and rehabilitation, that indicated the roads in the country were deteriorating faster than it could be repaired due to insufficient fund, Phillips indicated that the same remains true today.

“Rural parishes are suffering. I have no issue with roads and development. However, while we build new infrastructure, we need to ensure that we put a sustainable programme to maintain the existing road network.”

Phillips said repairs for the collapsed 125-year-old Troy bridge that once connected Northwest Manchester to South Trelawny, and was the main route for thousands of residents, have yet to be estimated by the National Works Agency since the breakdown in August 2021.

“People continue to risk their lives by crossing the river on wooden planks made from fallen trees. We have three schools in Troy (and) if there are clouds in the sky the parents keep them (their children) at home because of how dangerous it is to cross the river.”

With a defective bridge also in Craig Hill, Buff Bay, Portland, set to cost approximately $107 million for repairs, Phillips underscored the need for an increase in the allocations under the recurring budget for bridge repairs.

Phillips, in pointing to the failing infrastructure, challenged the Government to engage local contractors who are able to deliver quality work but are not considered the ideal when compared to overseas companies that dominate the space and charge less for labour and material.

“We have now settled in quantity and not quality in our roadworks, hence the lifespan of newly constructed roads is shorter and it costs more to maintain. A closer look at the industry reveals that the foreign contractors represent less than five per cent of the grade one civil engineer contractors. However, they control in excess of 90 per cent of the projects in that grade.”