35 years of building on his father’s legacy 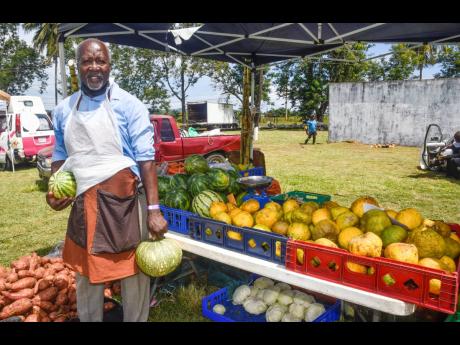 A belief in self-reliance has kept Hector Whyte ploughing, sowing, and reaping for the past 35 years.

The farmer, who had a variety of produce on sale at Monday’s staging of the St Mary Agri-Expo, told The Gleaner that he has built on his father’s legacy of tilling the soil to provide for the family.

Whyte opted out of carrying on the family tradition and went out to seek employment, but later found his way back to farming.

He recalled working at a pepper sauce factory and in the warehouse of a bottling company in his earlier years.

“When I went to work with people and saw how they pushed me around, I had to leave. I went into pig rearing and I was serving Kingston and Montego Bay with pork, but when the price of feed went up, I couldn’t manage, so I stopped and went into vegetable farming,” he recounted.

Cabbage, plantain, papaya, carrot, sweet potato, melon, turmeric, yam and pumpkin are among the items he produces year round.

“When I have an oversupply of goods and I don’t get them sold, I take them to the infirmary in St Ann. I feed a couple old people in Salem, Runaway Bay and in Beverley district. The Bible says it is more blessed to give than to receive, and it is always a pleasure to share what I have,” he said.

Whyte explained that he is able to afford a comfortable life out of his income from farming.

He pointed to his van that has served him faithfully and transported him to farmers’ markets and expos across Jamaica for over 23 years.

Farming has not always been a smooth road, but he is intent on making a contribution to Jamaica’s agricultural sector until it’s time to hang up the hoe.

He explained that farming, whether on a small or large scale, helps to reduce Jamaica’s import bill and furthermore, eating locally grown food is much healthier.

Whyte has had to fire dishonest employees and deal with the effects of drought and praedial larceny.

“About three years ago we had a drought that dried up everything, but I am determined to keep going despite the odds. When the thief comes, sometimes they take out a good amount of things,” he lamented.

Praedial larceny is a concern for Whyte and thousands of other small farmers, as it costs the sector about $6 billion annually.

The farmer said a major part of agriculture is managing the finances, and noted that a successful farm must also be sustainable.

“Farming is capital-intensive, so when I earn, I put aside some money to buy seeds and other inputs,” he said.

Whyte, who farms on the border of St Mary and St Ann, shared that none of his three sons have an interest in agriculture, but he hopes that the script will flip soon, and that at least one will venture into agriculture that is technologically driven.

His hope is that more Jamaicans, primarily young people, will begin to see agriculture as a viable source of employment and income.

“Many young people want quick money, but that only works for a while. The scamming will work for a time, but you will die or end up in jail. I would advise young people to start small, because land is available for farming,” he urged.

“When you can come in and cut a bundle of callaloo and some pak choi and steam it down, you’re better off. I find farming very rewarding,” Whyte remarked.