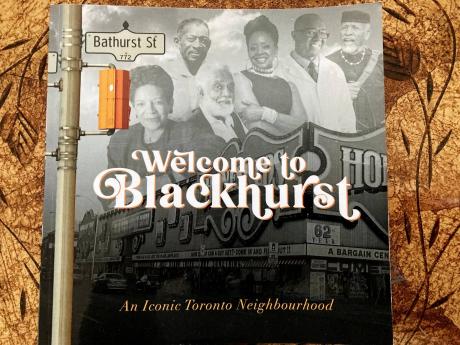 The history of a major intersection in Toronto that has been the home to a progressive black community is captured in a new book showcasing persons whose work helped to define it.

Welcome to Blackhurst: An Iconic Toronto Neighbourh ood, produced by Blackhurst Cultural Centre, formerly A Different Booklist Cultural Centre – The People’s Residence, features the stories of 30 persons who lived, owned businesses, or continue to call the area their home, including veteran journalist Royson James, who has written a story about the community he first lived in when he immigrated to Canada from Jamaica in 1969.

Makeda Silvera, a writer, editor, publisher, and activist, and a trailblazer in Toronto’s queer, Black queer and trans, and feminist communities is also featured.

In 1985, with her then partner artist, Stephanie Martin, Silvera founded Sister Vision: Black Women and Women of Colour Press – a first. In so doing, she created a space that centralised the stories of women, particularly queer women of colour.

“In this age of the phrase ‘giving someone their flowers’ meaning showing love, appreciation, and honouring them while they are still with us, Makeda Silvera has earned her bouquet. For her contributions to the cultural and political life of this city and this country, she deserves a garden, no, a meadow of unreserved gratitude and ‘nuff respect,” writes artist and curator Jamaica-born Courtnay McFarlane.

Also included is a profile of Walter Alexander Foster who was born in Westmoreland, Jamaica, in 1880 and immigrated to Canada in 1910. His family lived in the Bathurst neighbourhood for over 100 years. “Walter and his wife, Evelyn, were pillars in their church community, and he was seen as the ‘grandfather’ of the community,” writes Micheline Lashley Vega. Foster was the first black conductor of the Toronto Transit Commission when he started working there in 1916.

“Harry Gairey Sr was active at protests in the black community into his late 90s. Young people were in awe of him, so was I, and I still am. His accomplishment in civil rights and humanity in Canada should be in our educational curriculum, especially in Ontario,” writes Juan Emmanual Gairey about his great-uncle.

Patrick Hunter and Sandra Young, former owners of the Ashanti Room, and Ikeila Wright of One Love Vegetarian Restaurant – the former site of the popular Jamaican-owned Joyce’s West Indian Foods established by the late Carmel and Joyce Shoucair who came to Canada in the 1960s – are also featured.

“We are so fortunate to be in a neighbourhood when on a good day we can run in front of Central Tech and reimagine that we are Sam Richardson and we are an Olympian. On a good day, we can go down Bathurst Street, and we can go to the university of the barbershop. We can also go to Markham Street ... and remember the spirit of Deborah Brown. So the multiple assets in this community are such that we thought it was important to document their presence ... . And also to make it accessible for students so when they are doing their projects or their research or they want to be more informed about their identity, we believe that this document, Welcome to Blackhurst, the story of an iconic neighbourhood is something that will be great for them to have as a resource in their library.