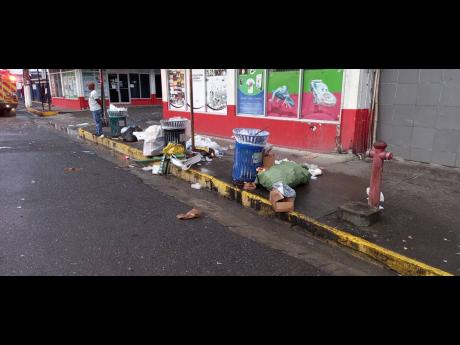 CHIEF MEDICAL Officer of the Portland Health Services, Dr Sharon Lewis, said the pile-up of garbage along the main thoroughfare throughout the parish could lead to an increase in the rodent population.

Lewis, who was addressing the Portland Municipal Corporation monthly meeting last Thursday, said the issue of solid waste is continuing across the parish and that it has worsened in the past month, as garbage pile-up have been observed along the roadways.

“There is an overflow of garbage at skips along the main road in a number of communities, as well as at skips in some interior areas for extended periods,” said Lewis.

“The health department is very concerned about this, especially against the background of reports of a more frequent sighting of rodents in the town of Port Antonio. The rainy season is approaching and there is the risk of migration of these rodents into homes, businesses, and food establishments,” she added.

It is against that background that Dr Lewis said she is encouraging the National Solid Waste Management Authority (NSWMA) to partner with other stakeholders, including the political directorate, to develop and implement strategies to address the problem, while everyone eagerly awaits the procurement of the garbage trucks.

Several communities throughout the parish, including Breast Works, Kensington, Long Bay, Norwich, Boundbrook, Lighthouse Road, Fairy Hill, Commodore, and sections of Port Antonio have been littered with garbage for an extended period, even though the NSWMA have contracted private truck owners to assist with the removal of solid waste to the dumping site.

The high pile-up of garbage through out the parish is seemingly worsening, especially since a number of trucks owned by NSWMA developed mechanical problems, last year. As a result, residents in some communities started the illicit practice of dumping waste along the roadway – creating a huge pile-up over an extended period.

The practice by some residents to dump garbage along the main thoroughfare has been condemned by Mayor of Port Antonio Paul Thompson, who expressed outrage at such practices, which he argued could well defeat the work done by Portland Municipal Corporation, the Portland Health Department, the office of the member of parliament, the NSWMA, and stakeholders, who implemented a rodent control programme which, according to him, was deemed successful.

“This has got to stop. We spent a substantial amount of money on the rodent reduction initiative, which basically eradicated or displaced rats and other rodents in varied communities and in the Port Antonio area, “said Thompson.

“I still remember that just walking along Foreshore Road to get to Allan Avenue one would see some of the biggest rats scampering all over in broad daylight. But we were able to rid the area of rodents through a collaborated initiative. However, based on the practice by residents to transform the roadways into a dumping area, it could very well become a breeding ground for rats, roaches, and other pests,” he argued.