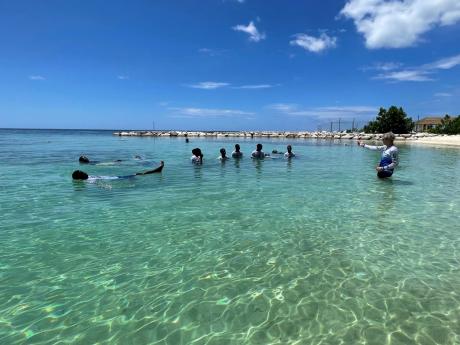 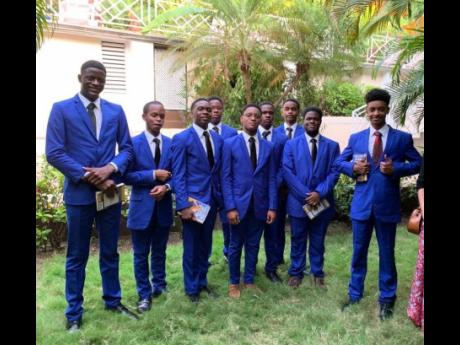 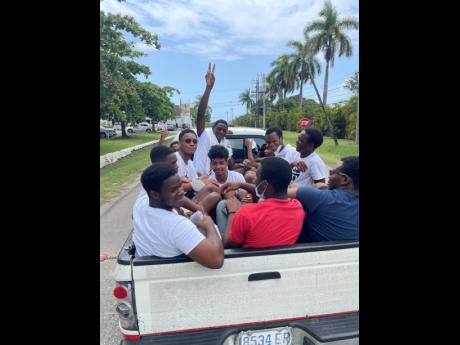 Contributed
Stellar Gent participants in the back of Richard Deenah’s truck, en route to one of several daily activities.
1
2
3

WESTERN BUREAU: JAMAICANS ARE not known swimmers, and the country’s men are not necessarily into social etiquette, particularly when it comes to dining. But 14 young Cornwall College boys are being exposed to those life skills, and others, that are...

JAMAICANS ARE not known swimmers, and the country’s men are not necessarily into social etiquette, particularly when it comes to dining. But 14 young Cornwall College boys are being exposed to those life skills, and others, that are expected to direct their future trajectory.

Social etiquette, sailing, swimming, fitness and wellness, literature,résumé writing, finance and constitutional rights are among the diverse offerings that their 17-year-old classmate, Romulus Deenah, has initiated in what has become front-row seats to the ‘village raising the child’ concept.

Deenah has taken the idea of mentoring to the next level, introducing what he has titled ‘Stellar Gent’, which he will have as a legacy project when he leaves for Canada to attend college next month.

The programme was offered to 11th-graders. Each recipient was required to write a one-page essay outlining his life experiences, personal interests and career aspirations, Deenah told The Gleaner.

“However, only 14 students submitted the essay, stating why they wanted to partake in the programme and what they hoped to gain from it,” he noted.

These boys have not looked back since. And from July 4, when the programme started, to the date of writing this article, they have embarked on an extensive curriculum, “to not only expand their knowledge and develop themselves as individuals, but also gain valuable access to resources and cultural exposure otherwise unreachable,” the 17-year-old revealed.

The group is diverse, the majority from lower- and middle-class areas, and many of them travel from far daily to participate in a programme that has the primary goal of turning them into ambassadors of their respective communities.

“The idea is to get them to take their experiences and pass on their newly developed values, perspective and skills to others in their communities,” Deenah stated.

The impact is already being felt by 17-year-old Garfield Levy, who spoke glowingly of the programme when The Gleaner reached out to him.

“It is excellent. We have been given a lot of life-changing experiences, learning social etiquette. We met with members of the security forces and were taught about our rights, particularly when stopped by the police. We were educated in the different types of drugs to stay away from, such as ‘Mollie’, which I have heard of, but was for the first time getting an in-depth explanation about it.”

Levy is from Garlands in upper St James, and is undecided about his career path.

“I am just taking it one day at a time,” he said. “At this juncture, this programme is making a real impact on my future.”

At a cost of $1.8 million, Deenah has sourced sponsorship from hoteliers, restaurant operators, and friends of his parents who train at their gym in Montego Bay. As of last Thursday, he had received more than half of the funding to carry the project through.

Books such as Born a Crime by Trevor Noah are among the materials the boys are required to read and discuss with Lauren Delapenha.

Deenah, who was born in Canada to Jamaican parents, but has lived here since he was a baby, also opted not to participate in the graduation exercise at his school. Instead, he used the $29,000 that it was costing to purchase suits for two of the boys.

Seventeen-year-old Brandon Atkins said Stellar Gent has given him an opportunity to be more physical, due to the fact that he goes to the gym for some of the activities.

“We talk about finance and cryptocurrency, so there is the educational aspect. I have also had the opportunity to network with a wide range of professionals. We have had a person who manages a bank, a chef, and multiple other individuals,” Atkins informed.

He is a non-swimmer who gained more confidence being in the water after classes with Knowles; and he also didn’t have a suit, but was aware, he said, of how to hold his knife and fork.

Companies like Chukka have agreed to assist with further summer programmes in its various departments as the young men get experience in the labour market.