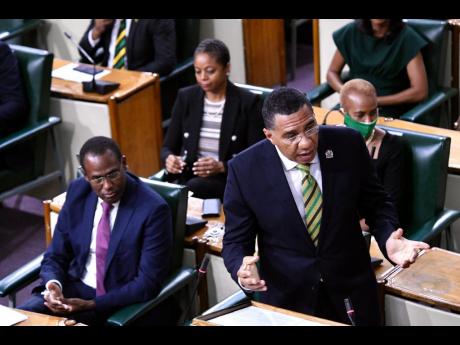 Governor General Sir Patrick Allen, Prime Minister Andrew Holness and Opposition Leader Mark Golding were among the officials who gave speeches at a joint sitting of the Senate and the House of Representatives on Friday to commemorate the Diamond Jubilee activities. -Ricardo Makyn photo

Jamaica's most senior political leaders have hailed the country's progress in various areas such as sports and international diplomacy in the 60 years of Independence but have bemoaned issues of crime and violence and colonial retentions.

Governor General Sir Patrick Allen, Prime Minister Andrew Holness and Opposition Leader Mark Golding were among the officials who gave speeches at a joint sitting of the Senate and the House of Representatives on Friday to commemorate the Diamond Jubilee activities.

However, he said for Jamaica to be fully independent, the country needed to first achieve economic independence.

"Certainly, external events like natural disasters, global recessions and war have created serious challenges but we must admit that some of these crises have been of our own making,” he said, noting the example of allowing inefficient state entities to continue to operate without immediate intervention resulting in increased debts.

He also highlighted the need to stem violence and crime in the country.

“In 1962, no one could have imagined the access to weapons, the rampant use of violence when settling disputes between each other, no one could have imagined the level of narcotic, human trafficking, scamming, cybercrimes and the growth of criminal gangs and enterprise scale,” he said, noting that the society was changing much faster than the legislative framework used to preserve social order.

Leader of the Opposition, Mark Golding shared these similar sentiments, adding that while the nation had a "a tremendous amount” of accomplishments to be proud of.

But he said the journey to full political independence remained incomplete. he reiterated call for the removal of the British Monarchy as head of state in Jamaica and the replacing of the UK Privy Council as Jamaica's final court of appeal.

“Jamaica 60 is an opportunity for us to come together and recommit to full political independence by removing the last vestiges of past colonial rule. So let us come together to achieve these outstanding and fundamental elements of our national independence,” he said.

“Undoubtedly, we have matured in our ability to exercise our individual right to vote, freely participate in the electoral process and to do so in a manner than respects each other's right to choice,” he said.

“Our journey have had its challenges as we have been beset by difficulties,” he said noting that the country continued to “wrestle with intractable levels of crime and violence,” he added.