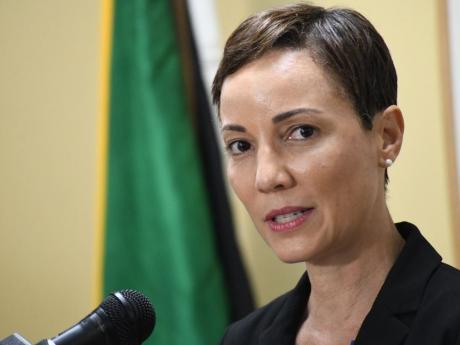 The document filed with the Department of Justice noted that Finn Partners was paid some US$99,000 for its services.- File photo

A June 6 filing by Finn Partners under the United States Foreign Agents Registration Act (FARA) has named Minister of Foreign Affairs and Foreign Trade, Senator Kamina Johnson Smith, as the principal in relation to the firm's work on her failed bid to become Commonwealth Secretary General.

The document filed with the Department of Justice noted that Finn Partners was paid some US$99,000 for its services.

Signed by Martin Ettlemyer on behalf of Finn Partners, the obligatory filing listed no other name but Johnson Smith's.

April 26, 2022 was given as the date when the agreement or contract was entered into with the principal, Johnson Smith.

Where the firm is required to state whether the filing is on behalf of the government of a foreign country, foreign political party or foreign or domestic organisation, it lists Johnson Smith as "individual-state nationality Jamaican".

United States based companies, organisations or individuals that carry out work on behalf of a foreign entity or person are required to file the details of such work with the Department of Justice under the Foreign Agents Registration Act.

In a statement last Sunday, the Office of the Prime Minister (OPM) said that the failed campaign by Johnson Smith for the post of Commonwealth Secretary General has cost taxpayers $18.2 million.

According to the OPM, the amount covered air and ground transportation, COVID-19 tests, meals and accommodation, public relations/communications support activities for staging of events such as the launch and engagements with delegations as well as IT support, printing of documents, photography, food and beverages.

Noting that Finn Partners provided media relations services for the Commonwealth Secretary General bid, the OPM said: “The government of Jamaica was not a party to this arrangement, which was secured by corporate Jamaica."

A number of entities in Jamaica, including the Opposition People's National Party have called for full disclosure on the Finn Partners agreement.