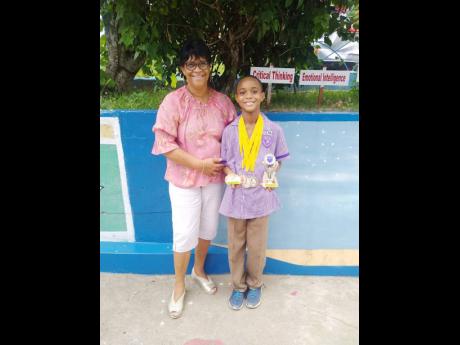 An 11-year-old who declared that he wanted out of day care at age two, because he needed to be in the classroom, is the 2022 recipient of the George William Gordon Scholarship.

Nine years after that declaration, Daniel William Gordon, who scored 397.3 out of a possible 400 in his PEP examination, said being the bearer of his namesake’s scholarship is destiny.

A student of Bogue Hill Primary and Infant School, Daniel, who will attend Herbert Morrison Technical High, has brought his Montego-Bay-based alma mater several notches up, helping them to stake their claim in the academic history books.

This is the first government scholarship for Bogue Hill, which up to 2006 was operating below par, but has become one of the most sought-after institutions in the tourism capital. In 2019, Bogue Hill topped the Ministry of Education’s Region 4 Grade Four Literacy Test and placed second in numeracy.

Daniel, who has been attending the school since kindergarten, said he had hoped to win a scholarship, but never expected to win. A high achiever, whose humility would not allow him to sound overconfident, the 11-year-old hopes to be a commercial pilot in the future, and if that fails, will opt for medicine. He said having earned this feat, he feels very accomplished.

“I feel the teachers who taught me are feeling as excited and happy,” he told The Gleaner from his home in Montego Bay on Tuesday afternoon.

As academically inclined as he is, he does find time to play video games, while he admits that his brilliance does not equate to his chess games or when he plays the clarinet, which are all a part of his extracurricular activities.

The son of Cornwallian William Gordon, Daniel said he opted to attend a co-ed school, and is on record telling his friends that he would rather get his face punched in by his father than a boy.

But I prefer he deal with me than multiple occasions of a boy dealing with me. Herbert Morrison has both male and female, so I’m less likely to be bullied around that much,” he expressed.

There is probably no one happier than Daniel’s mother, Dianne Bowen, a lecturer at the Sam Sharpe Teachers’ College. Both his parents are lecturers at the college.

Bowen said she expected her son to do well, whether or not he copped a scholarship, “because he is a brilliant child. At age two, he told me he wanted to go to school; he was through with day care”, Bowen stated.

She said he proved his mettle by being responsible and diligent when it came to his schoolwork. “He is very inquisitive. He will explore. He asks a lot of questions. He will challenge you, and he will rationalise things. He is a critical thinker.”

Daniel is known to assist his peers who may have challenges understanding what they were taught in class, and Bogue Hill principal Lorna Crooks concurs.

Young Daniel’s success is the school’s as well, Crooks noted.

“School is about children, and the children are our focus. What we seek to do is meet them where they are. We put in intervention strategies for those who struggle,” Crooks noted, clarifying that since the day Daniel stepped into Bogue Hill, his potential was recognised.

He has been an honour student since kindergarten, she said. However, she lauded his parents who, she said, bought into the school’s vision. “The parents worked with us. They played a pivotal role. They are great motivators and that makes our lives easier.”

Crooks described the young man who has placed the institution into the spotlight as lovable, and one who reads a lot. “He tends to be on the shy side, but that doesn’t stop him from excelling.”

Most of her students did well in the PEP and were placed at traditional high schools such as Mt Alvernia, Montego Bay High, Rusea’s, and some as far as away as Munro College and St Elizabeth Technical High.

“We have had children who have been getting these grades because we have positioned ourselves to achieve. But this one (George William Gordon Scholarship) is a big deal,” she admitted.

Crooks said she can retire now, having done her job as principal.