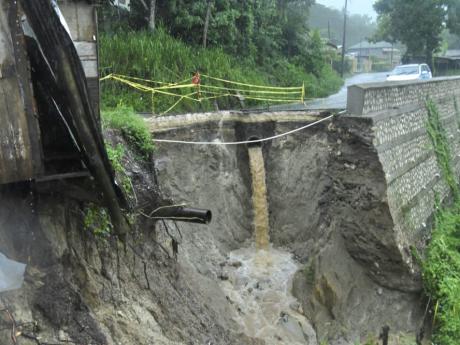 A huge breakaway at Suttons Square has worsened with the downpour caused by Hurricane Ian. - Nicholas Nunes photo

Residents taking taxis which go through Suttons Square in Clarendon could see an increase in fares, as operators may have to divert to a longer route.

A huge breakaway at Suttons Square has worsened with the downpour caused by Hurricane Ian.

Resident, Kirk Toolsie said the land slippage started a month ago and there is nothing to channel the water, so the road keeps breaking off.

"Water dangerous, we nuh have nuh control over water," he noted.

Tavres Mills, another resident, said land slippages have happened before and the retaining walls were fixed.

However, he said a solution for channelling the water is needed.

Follow The Gleaner on Twitter and Inst gram @JamaicaGleaner and on Facebook @GleanerJamaica. Send us a message on WhatsApp at 1-876-499-0169 or email us at onlinefeedback@gleanerjm.com or editors@gleanerjm.com.