Mount Pleasant getting it right academically by CHOICE 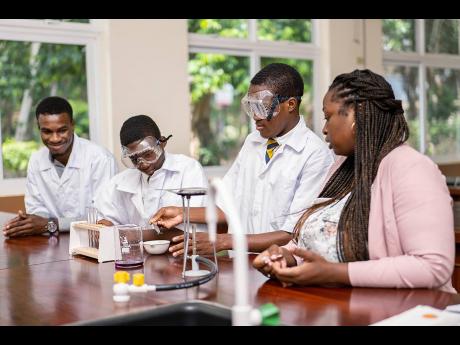 Contributed
Mount Pleasant students in a class with a teacher. 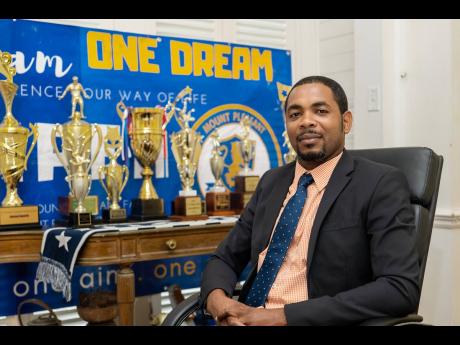 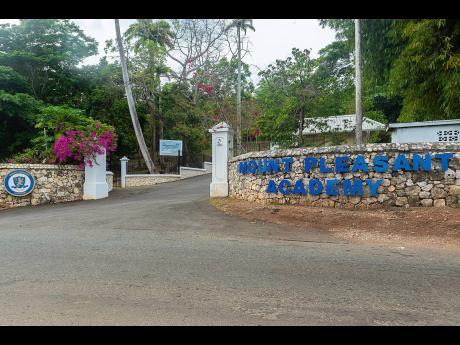 As Jamaica’s top football school, the academy has forged several alliances with local and overseas institutions that, along with a curriculum delivery system called CHOICE, have placed the St Ann-based institution on a positive trajectory academically.

Principal Vanie Clarke told The Gleaner that the four-year-old institution is excelling academically and continues to build a solid foundation for all students, some of whom he acknowledged will not be pursuing professional football later on.

Earlier this year the school achieved what Clarke labelled a “significant milestone in terms of our academic programme” when five students sat and passed the Certification di Italiano come Lingua Straniera exam, an international certification in Italian language.

The exam was offered to the students through a partnership that Mount Pleasant shares with the University of Siena in Italy.

The exam tests language at six different levels and is the official diploma of Italian language proficiency. Clarke said Italian language teacher Ciziani Boshi was instrumental in the students’ success.

Clarke added: “What we’ve been doing is really looking to forge partnerships that will have the boys benefiting from a plethora of different sources but all of it coming together now to ensure that they get the best experience,” Clarke pointed out. “Those who aren’t going to be professional footballers must have an opportunity to become the best versions of themselves.”

Launched in 2018, this is the first year the school is having a grade 11 class, but students had already been having success in several Caribbean Secondary Education Certificate (CSEC) and Caribbean Advanced Proficiency Examination (CAPE) subjects.

“Year one, the past rate was 96 per cent, last year it dipped a little to 89.5 per cent and this year it’s back up to 96.5 per cent pass rate. Within that we’re probably the only institution with a child going to grade 11 who already has five CSEC and CAPE subjects. We also have (two) students who sat two CSEC in grade seven and passed them both last year. So, it’s going extremely well on the academic side for us.”

Then there is the partnership with Delaware State University that has driven Mount Pleasant to forge a collaboration with York Castle High School that sees the sport institution benefiting academically and the high school’s footballers, in return, benefiting from top-class training.

“Mount Pleasant has a partnership with Delaware State University which allows our boys access to tertiary level studies so we are working in conjunction with York Castle because we needed York Castle to give us numbers and that’s how the overall thing started,” Clarke explained.

Delaware will be offering Mount Pleasant Academy students, degrees in sports management and mediation management but with the school not having a sixth form, which would have prepared them for the tertiary level, the students have to enrol to do sixth form studies at York Castle High School.

Raymon Treasure, principal at York Castle, said the collaboration with Mount Pleasant is one of several that his school has with other educational institutions.

“It makes it possible for Mount Pleasant to keep the students in their football academy up to 19, 20,” Treasure said of the partnership.

“This collaboration makes it possible for Mount Pleasant to sustain their football programme. My students who are also good at football, based on the arrangement, they too would board out at Mount Pleasant. So, I support Mount Pleasant in academics they support me with football.”

Treasure said students in the lower grades at Mount Pleasant also access some technical subjects at York Castle that are not available at their school. These include subjects such as motor vehicle systems, building technology, electrical, and others.

Meanwhile, Clarke has attributed his school’s academic successes to a curriculum delivery system he has termed CHOICE, which features attention to detail and a forward way of thinking on how to support the boys academically.

“Most persons would expect that it’s a school that’s built around football. Being a sportsman myself I always thought there was a way we could teach these boys that would allow them to realise their potential, not only on the field but in the classrooms. So, the support that we’ve built around them, we’ve allowed them to take on this in bite sizes. Of course, the teachers are diligent but we’ve also developed a pool of curriculum delivery system that we call CHOICE and what this does is it allows the boys the opportunity to do courses without having to worry about other courses.

“For example, a child wants to do geography and he’s in grade eight, we ensure that we support him around his maths, we support around his language but we don’t burden him with going to seven or eight other classes that he’s not interested in today.

“It’s a really different way of thinking rather than just thinking in a linear way but to look at each individual and say ‘what do they need, how can we support them?’ We listen to them so when we we’re putting together the CHOICE programme we ask the boys to tell us what they thought about how we were offering academics, how well do they think we could offer it without it being burdensome to them.

“We got the parents to support us on these initiatives, we got them to buy into it and the kids are enjoying it.”