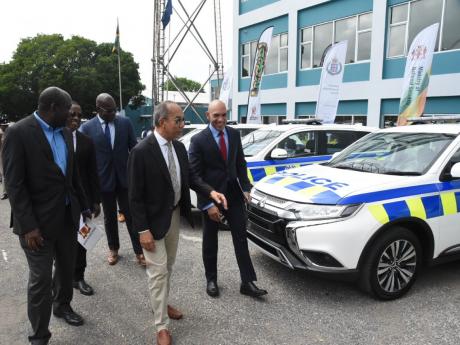 The Jamaica Constabulary Force's (JCF) mobility has been further bolstered with the handing over of 59 new vehicles for the organisation's fleet.

The presentation was made on Friday during a brief handover ceremony on the grounds of the Office of the Police Commissioner on Old Hope Road in St Andrew.

Deputy Prime Minister and Minister of National Security, Dr Horace Chang, in his remarks, said the provisions underscore the Government's commitment to improve and expand the capacity of the police to restore public order and safety.

“With the motor vehicles provided, of course, that's a critical part of policing, because response time involves mobility, communication, and well-trained officers. The mobility gives us a level of reassurance and the confidence of citizens, who can see the response time of the police and see them very visible on the highways and the communities they're in,” Chang said.

Police Commissioner, Major General Antony Anderson, said the motorcycles will primarily be used by the JCF's Quick Response Teams in major towns across the island to apprehend criminals.

“Our mobility is one the key pillars on which we operate. It's critical in an environment where the persons who are doing the wrong things in society, are very mobile. They are traversing the country and we also need to be able to move likewise and intercept them and engage them, as necessary,” he noted.

Consequently, Anderson said “these vehicles will be deployed in the most efficient way possible to deal with that matter, largely; and as more come in, we will plug the gaps that exist across the country, in terms of mobility.”

Permanent Secretary in the Ministry of National Security, Courtney Williams, said additional vehicles are to be acquired for the JCF by the end of 2022.

“What we are doing is enhancing the capacity of the police… to be able to respond. But not just to respond, but also to be proactive in the efforts to enhance public safety… and to reduce crime and violence,” he said.