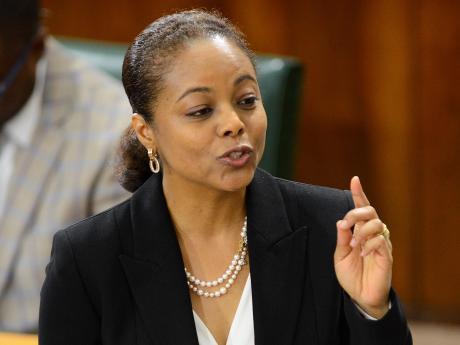 After triggering raging debate in June when she made a controversial comment that persons charged with murder and gun crimes would be denied bail under a new Bail Act, Minister of Legal and Constitutional Affairs Marlene Malahoo Forte is expected to table the long-awaited legislation today in Parliament.

The parliamentary agenda includes a statement from the Minister of Legal and Constitutional Affairs on the new Bail Act.

Criminal defence lawyers and human rights groups are waiting with bated breath to pore over provisions in the new bill.

Her comments had set off an intense debate in legal circles and among human rights groups who cautioned that under the Charter of Fundamental Rights and Freedoms in the Constitution, “any person awaiting trial and detained in custody shall be entitled to bail on reasonable conditions unless sufficient cause is shown for keeping him in custody”.

The proposed change that Malahoo Forte had signalled would address concerns raised by the security forces who have complained in the past about the role of accused persons on bail being key perpetrators of crimes.

“The legislative process should be so framed that persons charged for certain kinds of crimes should remain in custody while awaiting trial. The system of trial should be swift to ensure accused rights are protected," he said.

The Minister of Legal and Constitutional Affairs is no stranger to controversial remarks on the question of changes to the Bail Act.

In July 2016, Malahoo Forte,  the then Attorney General, said that the administration was prepared to make radical changes to cramp the spiralling murder rate, declaring that some “fundamental rights and freedoms guaranteed to Jamaicans may have to be abrogated, abridged or infringed."

In her contribution to the Sectoral Debate in 2016, the then government's chief legal adviser told her parliamentary colleagues that "right now, the sentiment is that 'no bail for murder, unless self-defence arises on the Crown's case and the likelihood of an acquittal is high'."

She suggested at the time that the evidence of the brazen killings and other criminal acts had convinced the administration that "such action may be demonstrably justified in this free and democratic society".