Calls for housing development roadways to be transferred to Government 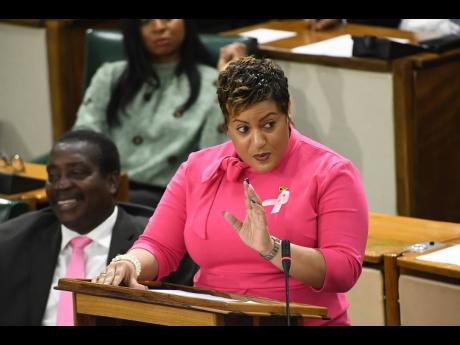 Member of Parliament (MP) for St Ann North Western Krystal Lee says significant strides have been made in rehabilitating roads in her constituency over the past year, as all commitments she made last year have been completed or are far advanced.

At the same time, the first-time MP is calling for roads in housing developments across the island to be transferred to government so their deplorable conditions may be addressed.

Making her presentation during the State of the Constituency debate in Parliament on Wednesday, Lee said roads in Back Salem, Islington to Bengal, Hampton, Thatchfield, Keith were some of the projects completed, as were installation of drainage systems near the Bamboo library and in Salem.

“All commitments mentioned in my presentation last year have been either completed or in the process towards execution,” Lee stated.

Lee also pointed out that the drainage in Runaway Bay has been improved to prevent flooding in the square, a recurring problem that last resurfaced in February this year.

She said estimates have been done to repair over a dozen roadways in the constituency.

Roads in Lewis, Mount Pleasant to Mount Olivet, Trysee to Knapdale, and leading to York Castle High School have been targeted for repairs, with others in the pipeline.

“I am extremely elated to announce today that the Runaway Bay to Brown’s Town roadway was sent out to tender two Saturdays ago. The people of St Ann North Western have been waiting for decades for the rehabilitation of this major roadway that goes to the heart of the constituency and that also links the northern part of the island to the southern areas,” the MP said.

In an apparent dig at her predecessor, Dr Dayton Campbell, Lee said she was making it “categorically clear” that there was no previous commitment to repair the road when she won the seat.

“The commitment came when I made representation and the sedulous minister without portfolio in the ministry of Economic Growth and Job Creation with the responsibility of works (Daryl Vaz) visited the constituency last year on July 21. The minister made several commitments on that tour of the constituency, most have already been addressed and others are in process. On behalf of my constituents I wish to say – we thank you, minister, for your commitment and diligence.”

On the matter of housing development roads, including those in developments done by state agencies, Housing Agency of Jamaica (HAJ) and National Housing Trust (NHT), Lee said, “There is a missing component to our development approval process which see ... deterioration of these roads, as they are neither classified as parochial nor National Works Agency (NWA) which would enable them to get state-funded repairs.”

Lee pointed to roads in development such as Belaire, Belaire Meadows, Cardiff Hall, Mount Edgecombe, Seacrest, Bridgewater, Hopewell Park, Minard Estate and others in her constituency, which are in need of repairs.

She said changes are needed.

According to the MP: “Madam Speaker, whereas we welcome the developments in the constituency, we are calling for a transitional arrangement to be introduced as part of the conditions of approvals for large housing developments. In the first instance, a clear timeline for the completion of development ought to be set and adhered to. Second, developers whether private or government developers are to maintain these roads for 24 months during which time, the roads are transferred to the municipal corporation. Madam Speaker, for developments that are currently having these problems developed by HAJ and UDC, I am calling for them to roll out similar programmes to that of the NHT to rehabilitate these scheme roads and other infrastructure, and thereafter transfer them to the municipal corporation.”